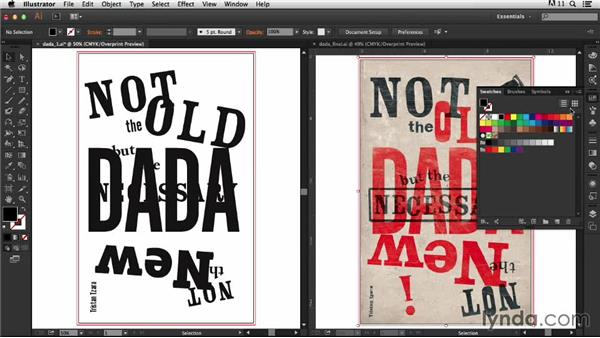 Join Nigel French for an in-depth discussion in this video Adding color and creating an overprint effect, part of Designing a Typographic Dada Poster.

…On the right, our finished version.…On the left, our work in progress.…We have two things that we want to do here.…Create and apply a color palette.…And create an overprint effect.…By overprint effect I'm referring to this kind of thing here.…Where we have the overlap of the different colors.…I just want to address a couple of things before we get to that.…This piece of type here, this word New, I'm going to change this to the closest…equivalent that I could find to clarendon on Adobe type kit and that is lexia, lexia…black and I want the n to be a cap N.…

I'll then just scale that down a fraction…and rotate a bit, I'm also going to make this…piece of type a bit smaller and up here I'm going to make that B a lower case b.…Right, now to creating the color palette.…Of course, we absolutely have to use red.…So our color palette is essentially going to be red and black,…but actually, rather than black, I'm going to use a 90% gray.…The solid black that we have is at default black, it's just a bit too perfect.…

3/13/2014
The Dada art movement rejected logic and reason, and instead embraced nonsense, irrationality, and disharmony. While the movement did not stand the test of time, Dada's legacy lives on in literature, visual arts, and graphic design. In this installment of Type Project, Nigel French shows you how to resurrect this "anti-art" style and build a Dada-esque typography treatment. As with the other courses in the series, he shows you how to choose fonts and color palettes appropriate to the time period and how to use Photoshop and Illustrator to recreate the style for a modern age. These techniques include simulating imperfect baselines, creating an overprint effect, and adding texture.

Want more inspiration? Check out Nigel's Pinterest board at http://www.pinterest.com/nigelfrench/dada-typography/.