Adding and aligning a center point 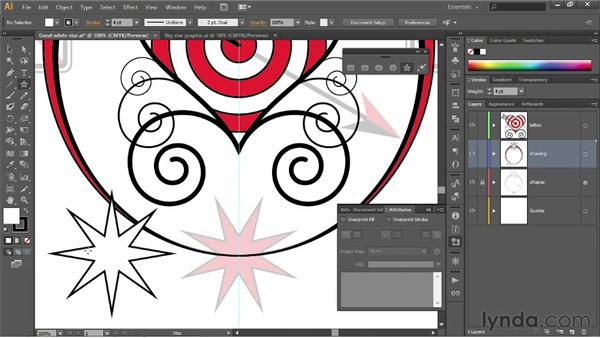 Join Deke McClelland for an in-depth discussion in this video Adding and aligning a center point, part of Illustrator CS6 One-on-One: Fundamentals.

In this movie, we're going to create the red star at the bottom of the graphic and by the way, I'm currently looking at the finish version of the drawing Big star graphic.ai and that red star is exactly the same size, although it's a slightly different orientation than the inset white star at the top of the graphic. But what we want to do is we want to exactly align that star so that it is centered on those anchor points at the bottom of the ellipse, and that's tricky, because while you can align one shape to another quite easily in Illustrator, and you can align a bunch of anchor points to each other if you so desire, you can't align a full shape with an anchor point that doesn't work, so we're going to have to figure out a different approach.

I am going to switch over to this file that I'm calling Great white star.ai, and armed with a Black arrow tool I'll go ahead and click on the inset star to select it, and then I'll go up to the Edit menu, and I'll choose the Copy command or press Ctrl+C, or Command+C on a Mac. Now I'm going to scroll down my graphic just so using the scroll bar and the scroll wheel on my mouse, because that's the easiest way to work here, and I'll go up to the Edit menu and rather than choosing Paste in Front or Paste in Back or Paste in Place any of those commands, which aligns the basic art work with its previous position, I'm just going to go ahead and choose the Paste command the standard paste command or press Ctrl+V, or Command+V on the Mac, and that will paste the star essentially in the center of the screen.

Now I'm going to move it off to the side, because it really doesn't matter where it appears initially. I need to align it to these bottom points right there. And easiest way to do that is to give the start its own center point, which is something that you can do inside Illustrator, but it's a little harder to find, it's a hidden function. You get to the center point option by going up to the Window menu and choosing the Attributes command and that brings up this tiny little panel, by default It just shows off a couple of overprint check boxes. What you want to do is click on this up down arrow icon right next to the word Attributes and that will expand the panel so that you can gain access to its other options, and you know it's right here these first two icons allow you to either show the center or don't show the center.

We want the center, so go ahead and turn on that center point, and we get the exact center of the star. Now you don't always get the exact center of the star, I want to stress something here. Let's say I was to grab the Star tool again, and I'll just go ahead and draw a star, press the spacebar to move it to a different location here that works with all the line and shape tools of course. Press the down arrow key a few times until we get our friend, the five pointed star and press and hold the Shift and Alt keys or the Shift and Option keys on the Mac, in order to get the American star.

When you're working with the star that has an odd number of points like an American star then you're not going to get a true center point, so I'll go ahead and press the Backspace key or the Delete key on a Mac. However, when you're working with the star with an even number of points like this one here then you will get an exact center point. All right, I'm going to press the V key in order to switch back to the black arrow tool, and I'll go ahead and click on the star to select it and notice there is our center point, and now I have only to go ahead and drag this center point and drop it at the bottom of the ellipses, and I want to see a white arrow ahead notice the difference here.

Here is the black arrow ahead which means I'm just dragging along and as soon as I see the white arrow ahead it means that I have a snap of some sort going. And now works whether you've Smart Guides turned on or off. Now I'm going to drag this star back for a moment, because I want to show you I happen to have Smart Guide turned off at the moment. If I turn them back on by going up to the View menu and choosing Smart Guides, and then drag from the center point, you can see that I'll actually see an intersect line there as well as the white arrow have, so I have additional information available to me, but in any case I get that star centered exactly.

All right, now I want to rotate the star exactly so many degrees so that it matches the angle the red star in the background. Well, here's how I figured out the angle of rotation, and this is going to make perfect sense to some of you and others might end up scratching your heads, I'm going to go ahead and hide the Attributes panel, so it's not in a way, but the star has what's known as a periodicity associate with it, it's a fancy words for the distance between each one of these points, so the angle between each one this points, so you imagine 360 degrees describes the entire route angle wise around the star around the circle, for example, that contains the star.

If we were going from one point to another point that would be 45 degrees, because it's from here measuring from here, we go 45 degrees then we go 90 degrees then we go 90 plus 45, which is 135, and then we get to 180 degrees, and then we start doing some additional adding to get all the way back around to 360 degrees. So from here to here is 45 degrees I want to rotate the star exactly half that distance, and I don't want to have to do the math I already did enough math, so far to figure out that it's 45 degrees divided by 2, so what you do is with the star selected, you go and click in the word transform up here in the control panel that brings up this pop-up panel of course.

Make sure to select the center point inside the reference point matrix right there, and it happens to be selected for me, and then you want to enter an angle value, you notice this Rotate option right here, you want to change that angle value to 45 divided by 2, so 45/2, and then press the Enter key or the Return key on the Mac, and you're going to exactly split the difference and rotate that guy halfway around just like it out to be. Then I want you to go out to the control panel click on the color swatch up there the first color swatch and change it from white to red, and we've got the exactly align star we're looking for, I'm going to go ahead and click off the star to deselect it.

So, remember if you want to add a center point which is going to be exactly accurate for any symmetrical shape, by the way, which includes a polygon or a star with an even number of sides or points then you want to go ahead and add that center point from the Attributes panel here inside Illustrator.