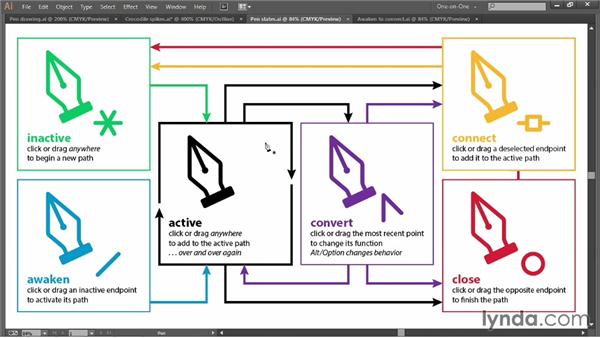 In this movie I'll show you how to activate and open path outline and connected it to another open path outline using the Pen Tool. Now, noticed that my Pen Tool has reverted to it's inactive version. As we know because we can see the asterisks. And that's because I saved off this progress file Crocodile spikes.ai. And if your going to work along with me, you need an inactive cursor too. And you can get it, just by nudging your most recent anchor point, by pressing and arrow key a couple of three times. And that way were left with this still selected, but inactive path outlines. So, just because a path is selected, does not mean that it's ready for you to add anchor points to.

For example, if I start click now, like this, then I will create a new path outline. Now, I don't want that, of course. So, I'm going to delete it. I just clicked five times, so I could press Ctrl or Cmd+Z five times in a row. But here's a simpler trick. You press the Backspace or Delete key twice in a row. The first time you press Backspace or Delete, you get rid of the selected point, then all the other anchor points become selected. And so, you can press backspace or delete a second time to get rid of everything. Now, just because these path outlines are inactive, and now, deselected, doesn't mean that we can't wake them up anytime that we want.

And so notice if I hover my cursor over an existing end point, it has to be an end point. This only works with Open Path, you'll see a little slash next to the Pen tool cursor, which means that you're going to bring that Path outline back to life. And a thing is the Pen Tool is always talking to you with these different cursors that it offers. And at the risk of overwhelming you very early on, I'm going to show you this kind of a flow chart that I came up with. I'll go ahead and shift over to this graphic right here and press the Tab key.

So that we can focus in on it. And the idea is that one version of the Pen Tool transitions into another according to this flow chart right there. So, things start off with the inactive cursor which is why I've colored it green and that is indeed the cursor that's active in my case. Once you click or drag anywhere to begin a new path, you immediately follow the arrow to the active cursor which allows you to Click or Drag anywhere. Add to the active path over and over again, which is why this is the one cursor that is surrounded by arrows. Because it doesn't necessarily take you anywhere else right away. And then you can go different directions as you can see. We will see examples of all of this throughout this chapter. And things end if you either connect to another open path, or if you close your existing path, so that it's no longer open.

So that it's a closed shape. In which case, either way, you're going to travel back to the inactive cursor, which is where things begin again. Now I know this is a ,lot to take in and I don't expect you to understand it at a glance, but it's here for you in case you want to come back to it. And I've created this simpler version of the graphic as well that spells out, what we're about to do. We're going to start with the awaken cursor down, here which is the one you just saw a moment ago. The cursor with the little slash next to it which allows you to click or drag on an inactive endpoint to activate its path. And then we'll immediately go to the active cursor as you'll see. But we're going to basically pass through it and arrive at this connect cursor which features a little end-point with a tiny path outline going through it. And that allows you to Click or Drag a deselected end-point to add it to the active path.

And as soon as you do so, then you will immediately go back to the inactive cursor, which invites you to start over again. So, let's see what that looks like. I'll press the Tab key to bring back my panels. And I'll switch back to the Illustration in progress. And once again, notice that I've got the inactive cursor. But as soon as I hover over any end point, and it doesn't matter in our case whether it's this one, or this one down here. We'll see that blue awaken cursor, with the little slash. Then, go ahead and click on one of those end points, and move your cursor away, and you'll see you now have the black active cursor.

And you can click with it if you want in order to add more points, like so. I don't want to, of course, so I'll press Ctrl+Z, or Cmd+Z on the Mac to get rid of those extra points. I still have an active path and I know that, because my Pen Tool is the black version without any extra markings. Now if I position my cursor over and deselected end point whether its this one or this one. I'll see that orange connect cursor which allows me to draw a segment between these two anchor points.

I want to connect here of course, so I'll go ahead and click like so. And as soon as I move my cursor away I am now greeted by that green inactive cursor which invites me to go forward and create a new path. And that, friends, is how you activate an open path outline, as well as connect it to another open path, here inside Illustrator.