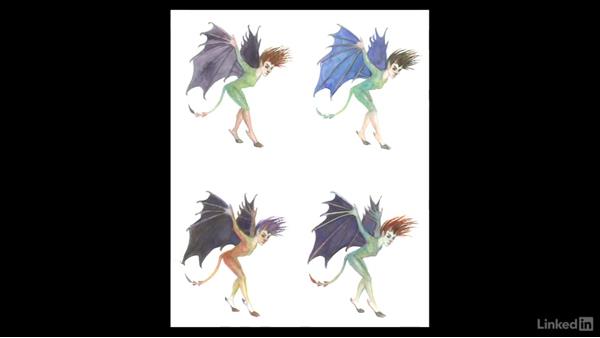 When deciding on a color palette for a character, it helps to do color studies. A color study is a simplified, smaller version of your final character, used to experiment with palette choices. Here I’ll demonstrate the need for creating multiple versions, and explain why I tried different combinations and how I landed on the final choices. You’ll learn ways to critically analyze your own decisions for color, so that the final result is considered and packs more punch for the audience.

- Let's take a look at our Pan character again. I completed the refined drawing, and the next step is deciding on color palette. To do this, I first had to choose the drawing that I wanted to color. The choice really came down to which would make the strongest impression, and I really had to remember the thing that I go back to in the beginning, which is silhouette and gesture. And when I compared these two drawings, I felt like the image of the Pan character with wings splayed was much more interesting as a general silhouette shape on the page, and created more interesting negative space, that's the spaces between the object, the open space and another element or object of the character.

And this one just seemed more vertical and less interesting. So I chose this character, and what I did was I took the sketch and I put it in Photoshop, and I multiplied it four times and made it really small. The reason that I did this is that if I left these little sketches printed on water color paper, large, I would start to noodle and get too detailed. These are meant to be color studies. They're meant purely to be something as an exercise to figure out the plan for color.

So I kept it tiny and tested different variations. Now, for me, I first thought, well it should be a naturalistic-looking character to look like it lives in a woodland space. I thought, well bat wings are sort of a purple-blue color, that makes sense. And, you know, she might be green in color just because she lives in a green place. But for me the problem was the flesh tone, and the green, and the purple felt really isolated as colors.

It wasn't quite working for me. So I tried another version where I did blue wings, which was kind of more magical and sky-bound, so it seemed hopeful, and that related to a sense of what the character's personality might be, but still had a kind of fierceness because of the shape. It worked better, I liked the wing color, but I still wasn't satisfied that all the colors in this palette were harmonizing and worked well together. So after testing a sort of cool palette, I decided I'd make a change and go in a completely different direction, just to test and see if it worked.

So I tried a warm palette, with sort of warm purple, orange, and brown tones. Naturalistic-looking, but all about heat. I liked it, but it still didn't feel quite right in terms of this woodland creature. It felt too much like the original Pan, which is all brown tones. It wasn't there, and sometimes with color, it's both what does it mean? What is it saying to you? But it's also just intuition. It just doesn't feel right. It's not the character I had in mind. So in this final study, it was nearly there but not quite right.

I really like the green pale of the flesh and how it relates to the scales. I love the red of the hair, but I also like the blue of the wing, and so I recombined all those elements in the final design. Like with the other sketches, it's important to create as many variations on a theme as possible, testing different possibilities until you land on the combination that feels right for the character. For me, the bottom line is creating a creature that looks like she comes from nature. For your character, remember that color can symbolize an emotion, a personality-type, or other common associations that will provide insight for the viewer.

4/12/2016
The heart of most narrative art lies in the characters in the story. This course will reveal the "secret sauce" that makes a character memorable, beloved, villainous, funny, or celebrated. Mary Jane Begin—illustrator, author, and Rhode Island School of Design professor—explores character design from all corners of the illustration universe, including cartoons, comics, feature animation, gaming, kid's books, and advertising.

Mary Jane explains how the components of good character design can be broken down into concrete elements. She shows how body shape, posture, anatomy, facial expression, costume, color, movement, and abstract aspects like archetypes and environment bring a character to life. The lessons are illustrated with examples from Mary Jane's books, as well as famous, heart-warming characters created by a group of extraordinary character designers.
Topics include: