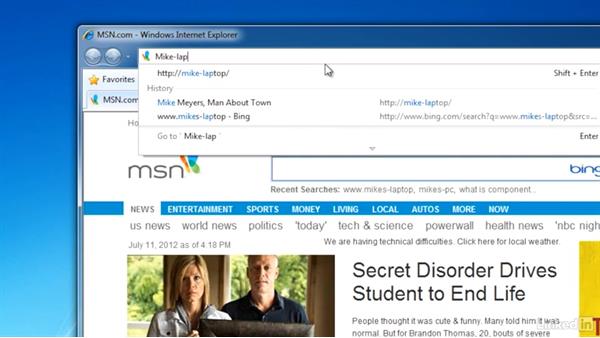 - Hi, my name is Mike, and I'll be your server for the evening. It's funny, when you think about what networking is all about, most people would say, well it's sharing information, or physically connecting computers with cables, or looking at a webpage, and I'm not saying any of those are wrong, but if you really want to understand what networking's all about, you have to appreciate that there are servers, there are systems out there that have resources, and there are clients, those of you who would like access to these resources, and that's what it's all about.

So, what I've got starting way over here, I've got my laptop, and it's an old, ugly laptop, but it's actually very, very powerful, and it is connected to this box, you can see this blue cable, so it comes into this box, which at least for the moment I'm going to call a hub, and then that hub also creates also a connection following this other blue cable going across, and you'll see that connects into the back of my computer. So, I have two computers connected together right now, and that's their only connections.

Welcome to Mike's awesome web page circa 2001. Obviously, I didn't make this, but somebody else found that very, very funny. I wonder who that is. Now, what's interesting is that we've opened up web clients, Internet Explorer, Firefox, Chrome, those are web clients. We use those to access web servers. But what I want to do now is I want you to go look on my laptop here and let me show you what a very typical, but simple web server looks like.

So, here's my laptop, and it's just running regular Windows 7 Ultimate right now. It's not running anything fancy at all. And you can't see anything going, and that's because servers don't need an interface unless you're making configuration. So, if we take a look, that is my web server running. That's all there is to it. You don't need big interfaces or anything. All these web pages and stuff are developed at other places and just uploaded to this guy on an at needed basis.

It actually does have web-based configuration screen, so I could like turn the web server on and off, and things like that, and decide where the web pages are, and all of that type of thing, but this is a web server. See, this always blows people away when they first see servers because they think the server has to be all fancy and all that stuff. Why does the web server have to show you the web pages? Its job is to send web pages to clients, but it in and of itself doesn't have to do that, and that's so common on anything, from systems that are streaming videos, or music, or even your hard drive, just because you're sharing a hard drive and other people are accessing it, that doesn't mean you have to see the contents of that particular folder or that particular hard drive on the serving system.

6/28/2016
Earning a CompTIA A+ certification validates you've obtained the foundational knowledge and skills needed for a career in IT. This six-course series is designed to both equip you as a technician for your role in IT support, and prepare you for taking the 220-901 exam.

The CompTIA A+ 220-901 exam is comprised of six key parts. The fifth, networking, is covered by this course. Instructor Mike Meyers provides an introduction to networking by exploring cables, network IDs, IP addresses, and ports. He explains how to deal with a DNS, configure a router, and set up a wireless network while applying security standards. He also discusses Internet connections, including dial-up, broadband, wireless, and more.

Note: The six courses designed for the CompTIA A+ (220-901) exam preparation include core processing, core hardware, peripherals and building a PC, displays and printers, networking, and laptops and mobile devices.

IT Help Desk Network Administration IT and Hardware IT