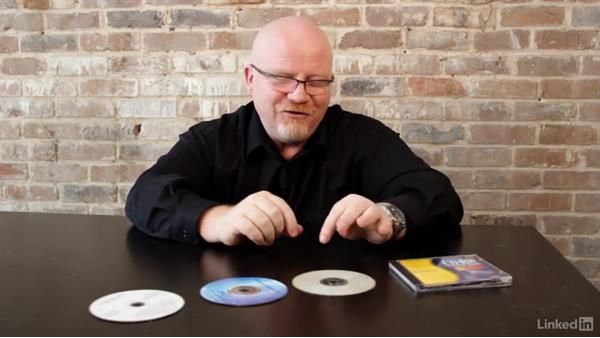 Join Mike Meyers for an in-depth discussion in this video CD media, part of CompTIA A+ (220-901) Cert Prep: 3 Peripherals and Building a PC.

- There's one particular technology that I remember when it came out. And I've watched it as it's matured and become and important. And now I've watched it begun to have slow down a little bit and that is, CD optical media. So there's a lot of CD stuff on the A plus. Let's make a point to cover it really quick. It all started back in the 1970's with this guy right here. Of course, if you don't love The Judy's then this is the music of your forefathers. This is great stuff. Anyway, it all started back in the 1970's when the music industry was trying to come up with a replacement to vinyl, to LP's.

And came up with what was known as CD digital audio, or CDDA. CDDA, stored everything on little lands and pits, on the back of this. It could store, and it was really designed to store music. So it's measured in time more than anything else. And it was designed to store about 74 minutes of music. Which was the equivalent of the longest version of Beethoven's ninth that they could find. CDDA, most of the data is actually towards the label side.

You can put scratches here all day long, and you won't destroy the data although you might make it hard to read. CDDA, was great for music. And over time people began to appreciate that if we're storing stuff in little tiny lands and pits as they called it. And using a laser that reflected or didn't reflect to determine 1's and 0's. Wouldn't this be a great way to store data? And well that's a good idea except for a couple of problems. First of all, CD store their data kind of in a spiral fashion.

Kind of like an old LP record. And it would use tracks so there would be individual chunks which was for each song was the idea. It's similar to an LP. So that type of format didn't really lend itself really well to data. Data needs things like group directories and stuff like that. So an organization, called ISO. The European Industries Standards Organization. Came up with a standard called ISO 9660. ISO 9660, took the CDDA format and created a format where you could store folders and files and that kind of stuff.

So what would happen, is that you would take these CD's and you would reformat them as ISO 9660. And these were known as CD-ROM, read only memory. If you wanted to make CD-ROMS, you had to have special mastering equipment and do stuff like that. And as result it was really used primarily for distribution medium for a long time. Now what was interesting, is that early on in the CD process, they discovered that they could actually steal a little bit more space in the center. So the first generation CD's all stored about 650 megabytes of data.

But after a while, they figured out that they could actually steal some of this space. And the most common CD's today will store 700 megabytes. Now, so CD-ROMS were great and they really did change the industry. Instead of having to walk around with a bunch of floppy diskettes or something. You could take one of these with 650 megabytes on it and distribute media. And we still do that even today. They're great for that. The downside to CD-ROMs is they're read only memory. You couldn't burn your own.

And that changed when CD-R came along. I don't know if you guys can read this. What Im gonna do, is show you. If you can see this. Now, this is a CD-R. CD-R's are burned once type optical media. It's still go the same capacities and everything else but the big difference is, is that you could actually burn stuff on it. Now, if you want to burn any kind of data, you have to have a burner, now if I showed you a CD-ROM drive.

And a CD-R drive, they look identical. It's not like there's something about them that makes them look different. But a CD-R would have two lasers. One laser for reading and one for writing. And it was actually kind of cool is that organic material that it could heat up and destroy with a laser. And in essence make you pits and lands to make it all work. If you have a CD-R drive. Well there aren't any around anymore, but if you had a CD-R drive, it could also read CD-ROMS and that was important.

So, even though CD-R drives are long gone. Today were most of us have at the very least DVD burners if not Blu-ray. They can still burn on a CD-R. So CD-R disks are still extremely common. They're fantastic as a quick and dirty way, for archiving information. Weekly backups, you've completed a case or a project and you want to archive it. Nothing can beat a CD-R, they're fantastic. Now, CD-R's are great, but I want to take it one more step.

And that is, let's see if I can pull this guy out for you. There we go. Here's a CD-RW, CD-RW stands for, as you can tell just by reading it. CD rewrite, CD-RW's have the ability to be able to be read, burned, erased and burned. And erased and burned, and erased and burned, over and over again. And hundreds of times there is some kind of limit, it depends on whose brand you're using.

And all you have to do is make sure you have the CD-RW burner. And if you have any kind of more modern burner, it can burn these guys too. So, the important thing to remember with CD's is that even though the idea of a CD is being supplanted by DVD and Blu-ray. The size of CD is still extremely comfortable for a lot of stuff that we do. It's very common to see distributed media with a video card or with any kind of device that comes with your computer, it's going to usually come with a CD.

Some come with DVDs but CD's are around quite a bit. The big thing that the A plus is going to worry about more than anything else is capacity. In particular, you want to watch out for the 74 minute/650 megabyte. Versus the 80 minute/700 megabyte differential. They're both there, and you literally have to be able to look at the the disk to be able to determine whether it can do it or not. Pretty much the 700 megabyte/80 minute is by far the most common.

Also keep in mind, is that the first CD's came out at a particular speed. And over time, these speeds continued to increase and increase and increase. So what they'll do, is they'll take that initial speed, and then they'll create a multiplier. So the first CD's that came out read at 1x speed, and then 2x, 4x, 8x, 6x. Today you can have a player that can read CD's at like 52x. So they read very quickly.

And a CD-RW is going to have a read speed, and a write speed, and what they call a re-write speed. And that becomes very important when you're buying a particular drive. You want to make sure that you're getting the best optical media that can particularly handle it. So, when it comes to speedy optical media. Remember your speeds and remember your sizes and you're gonna be just fine on the A plus exam. (upbeat jazzy music)

6/28/2016
Earning a CompTIA A+ certification validates you've obtained the foundational knowledge and skills needed for a career in IT. This six-course series is designed to both equip you as a technician for your role in IT support and prepare you for taking the 220-901 exam.

The CompTIA A+ 220-901 exam is comprised of six key parts. The third, peripherals and building a PC, is covered by this course. Instructor Mike Meyers discusses how to work with auxiliary devices, including media and accessories. He shows how to configure device behavior and manage the ports that support the peripheral devices. CD, DVD, Blu-ray, USB, flash media, FireWire, keyboards, mice, cameras, and webcams are all explored.

Note: The six courses designed for the CompTIA A+ (220-901) exam preparation include core processing, core hardware, peripherals and building a PC, displays and printers, networking, and laptops and mobile devices.

IT Help Desk IT and Hardware IT A+