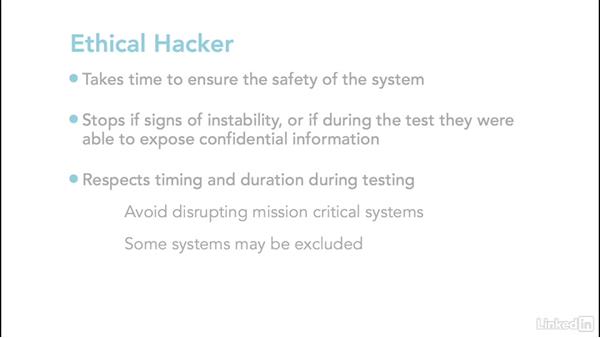 During the attack, the ethical hacker must respect timing and duration, and avoid disrupting mission critical systems. In addition, the ethical hackers must have a clear understanding of what data to avoid, as specific data protection laws may apply.

- [Instructor] Penetration testing…simulates a real world attack on your system.…Ethical hacking reveals security vulnerabilities…in a system's design and implementation.…The goal is to reduce security vulnerabilities…before becoming a victim of an attack…by intruders or malicious insiders.…During this simulated attack, the white hat hacker…tests systems and applications to measure the ability…to bypass the authentication procedures…and test using default or weak passwords.…

Testing also includes monitoring the network…for evidence of credentials being sent in the clear.…The ethical hackers even use social engineering techniques…to see if someone can obtain a password…by contacting the help desk…and claiming they lost their password.…All during the penetration test…there is one main difference,…unlike a true malicious hacker,…the ethical hacker takes time…to ensure the safety of the system,…and stops if there's any signs of instability,…or during the test,…they were able to expose confidential information.…

The ethical hackers must respect timing and duration…