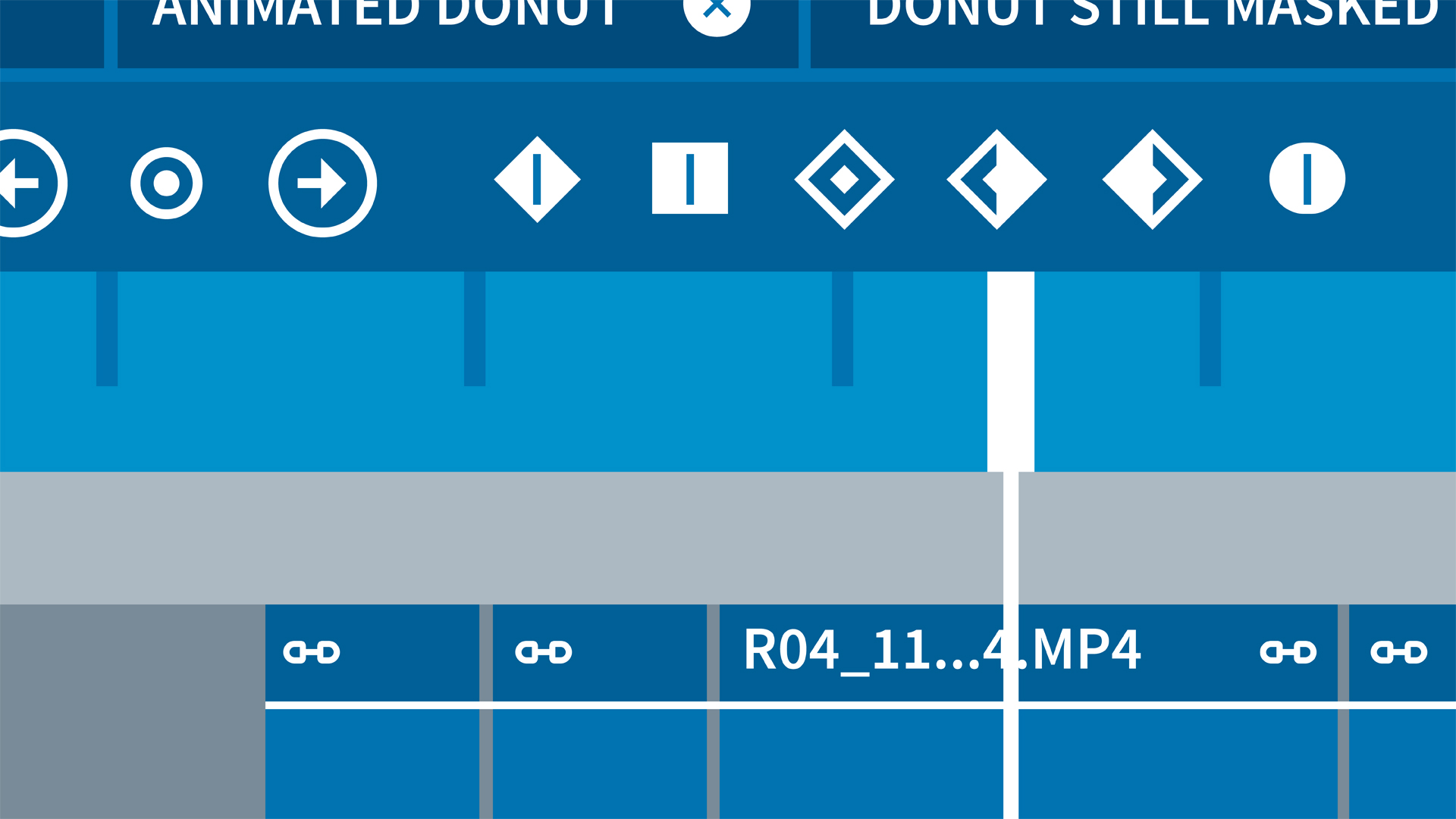 - [Instructor] So far, we've primarily focused on the editing of video. Because generally speaking, that's the starting point for most projects. Once you've got the shape of your project coming together on the timeline, that's when you will towards the audio. Audio files are listed in the media panel along with your videos. Most video clips have associated audio, as we've already mentioned, and you can of course also have audio only media. In the exercise files, there are two pieces of music, which can be used to liven up the overall project.

Audio works much the same as video in terms of HitFilm's core features. Selecting an audio file in the media panel displays it up in the trimmer, where you can play back the file and also see a large audio waveform, which is a visual representation of the video's amplitude over time. In the case of music, you can the waveform to identify which parts of the track are loud and bombastic and which are quieter. I've imported a voiceover recording, and loading this into the trimmer, you can see that the wave form makes it easier to see where words are being spoken.

Switching back to the music track, I'm gonna trim it down to just this early part, which we can see is quieter and will serve as a good introduction. The controls are all the same, as with trimming video, so I use the set outpoint button to trim down to just this early section and then drag it onto the timeline to place it. Because this is only an audio clip, we can only place it onto an audio track, and there's no associated video element. Remember that you can create a new track automatically simply by dropping the clip onto the blank area below the existing audio tracks.

Although HitFilm allows you to work however you want, it's often a good idea to stay organized on the timeline. Dedicating specific tracks to specific purposes. For example, I've created a new track for this piece of music. I'll be sure to continue using this track for any other music I add to the timeline later. This has numerous benefits, such as being able to quickly turn all music on and off with the mute button here. If I have music popping up on all sorts of arbitrary tracks, or sharing tracks with dialogue or Foley sound, it wouldn't be possible to isolate and silence the music without affecting other sounds at the same time.

Note how the timeline displays waveforms for each audio clip. This is especially useful as you can use the waveform to precisely synchronize timings between multiple audio clips. Once an audio clip is on the timeline, it behaves exactly like a video clip, with all the editing tools behaving as you'd expect. There is a key difference between using multiple tracks for video and using them for audio. With layered video clips, the higher ones simply obscure the lower ones, like a stack of paper, so that you can't see the ones underneath.

When you have multiple tracks of audio, however, all of those sounds combine together on playback, resulting in a louder overall soundtrack. This means that if you want to have a project which sounds good, you will need to put some effort into the audio mix. HitFilm has numerous tools to assist in this area. To start with, the default interface layout places the audio levels panel at the bottom right of the screen. This is a quick way to tell at a glance whether your audio is too quiet, too loud, or just right.

During playback, you'll see the meters rising and falling, representing the overall combined volume of all of your timeline's audio. The zero decibels point is the one to keep an eye on. If you audio goes above that, it's gonna start peaking, which means it'll likely sound crackly and over loud. If the bars never get anywhere even near zero, there's a good chance that your audio is coming in too quiet. If your audio is averaging out around the minus four decibel point, then your project should be sounding pretty good.

The reason to use levels to judge your audio rather than your own ears is that it cuts out random factors such as the volume of your speakers or your headphones and the acoustics of your room, not to mention the quality of your own hearing. If you compensate for over quiet audio by simply increasing the volume of your speakers, that's not gonna help your audience when they come to watch the video on their own equipment. Using the meter readings to get the audio to a consistent point gives you reassurance that the audio will sound fine on any kind of decent setup.

The meter panel's good for highlighting if there's a problem, but it's not so useful for doing something about it. This is especially the case once you have a multi-track audio mix, as all you're seeing with the meters is the final mix to output. If you go up to the workspace's menu, you'll see that there are some disabled panels. You can turn panels on and off as required. In this case, click the audio mixer to turn it on. The mixer will most likely appear on the right edge of the screen, which isn't an especially convenient place for it to be.

So let's grab the audio mixer tab and drag it over and place it next to the trimmer panel's tab, moving the mixer into that container. The audio mixer has the same kind of levels readouts, but it splits into each individual audio track. This is another good reason for using your tracks in an organized, planned way. If you dedicate track one to dialogue, track two to Foley, track three to music, and so on, it makes it far easier to understand the mixer and make necessary adjustments based on what's happening.

In the case of this project, for example, during playback, we can now see exactly which tracks are the loudest and the quietest. It's now obvious that track one, the dialogue, is coming in rather quiet, or track three, the music, is very loud. The more complex your audio design, the more you will need to rely on the mixer readouts to inform you about what's happening as your ears won't be able to identify and separate out those sounds. It's now easy to make adjustments to achieve a good sound mix.

The vertical bars on each of the tracks here adjust volume, so in the case of the dialogue track, I can see that the audio is coming in pretty quiet, and I'll use the bar to boost that track up by about four decibels, so that the dialogue is now coming in around minus two to minus four. I can then use the bar on the music track to drop it down significantly, so that it functions as background music rather than overwhelming the soundtrack. On playback, the individual track meters show me the results of my changes.

And on the right of the meter is a mixer showing the final output, with all of the audio mixed together. There are additional controls for adjusting the stereo balance of tracks, or for muting or soloing entire tracks. You can also adjust volume over time by clicking on this key frame toggle button. This will store your changes on the frame where you make them, enabling you to tweak the volume of tracks at different points in time. You can even do this during playback, mixing on the fly as you go.

You wouldn't want to be adjusting multiple tracks at the same time in this way, but the system enables you to go through the edit with multiple passes, adjusting a different track each time. I mentioned keyframes just now, and they're something we'll cover in much more detail later in the course, when we take a look at animation. But suffice to say for now that they are specific frames which store particular information for settings. In this case, storing the volume of a track at that point in time.

You can see the audio track keyframes down on the timeline by clicking the toggle track/object envelopes button. The white line represents the track's volume over time. You can click and drag on these keyframes to further adjust them if you want. If you click the envelopes toggle again, the timeline will switch back to showing the volume envelopes for individual clips rather than the track as a whole. This is an additional level of granularity, whereby you can adjust the volume of specific clips instead of the entire track.

This can be useful if you have one or two clips, which are of a very different volume to all the other clips on the same track. To add keyframes to the audio envelopes of individual clips, you can hold down the CTRL button and click anywhere on the volume line. These can then be dragged up and down to change the volume. If you switch to the controls panel, you'll find more precise controls for adjusting a clip's volume. The controls panel always shows information for the currently selected clip.

So make sure you've got the right clip selected on the timeline. The goal is to have a mix, which adds up to an acceptable overall master volume, as shown in the master meter reading, with the various elements of your soundtrack working together in harmony.

8/15/2018
Video editing doesn't need to be complicated or expensive. HitFilm Express is free filmmaking software with many robust editing and effects capabilities. For the novice, it's perfect for most basic and intermediate functions, including editing, trimming, effects, compositing, audio editing, titling, and more. This course provides introductory video editing and post-production training, highlighting the main features of HitFilm Express. Simon Jones shows how to import media, perform basic edits to audio and video, color correct footage, add titles and effects, and export and share your film. After taking this course, even non-video people will be able to edit a project with skill and confidence.
Topics include: