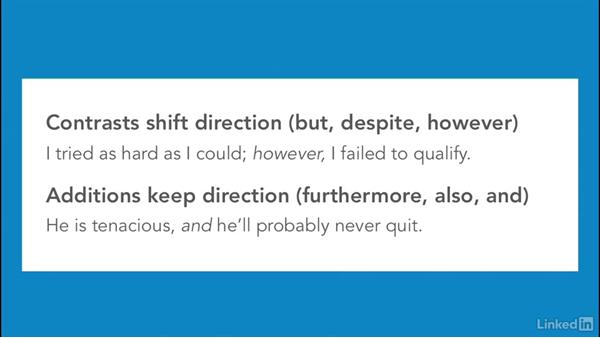 - [Voiceover] Since the people who write the GRE's job, is to write questions that have definitive, fair answers, they have to use signposts sometimes, in text completion questions, that help you fill in the blanks. So in this video, I'll discuss some common signposts. So signposts are just things that help define the meanings of sentences. So let me show you what I mean. The first example that I have is contrasts. So contrasts are words that shift direction in a sentence. These are actually really great to notice in reading passages as well.

So examples of these include words like but, despite, however, although. So here's an example: I tried as hard as I could; however, I failed to qualify. So the however tells us, as soon as we see it, now the meaning is gonna shift. These are great, because the shift in the GRE question, is usually gonna be a sharp shift, something from, like black to white. So additions keep the direction of a sentence. So these are words, maybe like furthermore, moreover, and. Here's an example for you: He is tenacious, and he'll probably never quit.

So you can see that the meaning of the sentence just continues along its merry way, without changing, and in fact, this is a good signpost to recognize. Even if you don't see any other signposts, you can probably assume things just continue. So next one I have is, cause and effect. So this is indicated by words like therefore or so. So if I said, "We're out of gas, so," cause and effect, "we're walking to school." So another example of a signpost is a colon or a semicolon. These are kinda similar.

They signify that an explanation is coming. So if I said, "Their conversation abruptly stopped," and then you saw a colon, you immediately should know, that now we're gonna have to explain why their conversation abruptly stopped. And an intensifier, these happen once in a while, these sometimes will indicate raising things to a higher degree. So if I said, "He was smart," then I said, "I'd even say," now I'm gonna go even further, in terms of degree, and say, okay he's a genius. So remember, noticing signposts, and thinking about the meaning they create, is an easy way to pick up on what's going on in a text completion.

So if you have to fill in the blank, the signpost might tell you, what part of the sentence will have to mean. So as you analyze these questions, make sure you consider how any of these signposts help create the meaning of the sentence.