Structure of the GRE 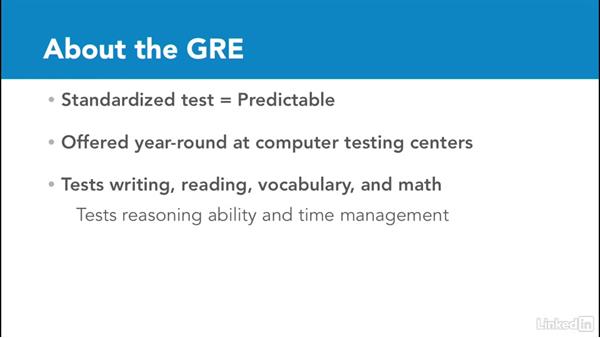 - [Voiceover] Before I begin teaching you how to take the GRE, I want to spend a little time telling you about the test. In this video, I'll go over what the GRE is, how to sign up, and how the test is structured. So the first place you can go to get your GRE prep started is the GRE's official web site, which is ets.org/gre. So this is a good place to read about how the test is designed and what it's used for. So basically, the GRE is a standardized test. Which just means it's a test written very carefully so that the GRE you take this year and the one someone else took last year will be extremely similar in terms of content and difficulty level.

The good news is that this standardization makes the test very predictable. So most people take the GRE since the graduate programs they're applying to require it. It's a computer test that's offered at designated computer testing centers year-round. You can sign up for the test by going to the official web site, which is ets.org/GRE, and registering online. So the GRE's going to test your ability to write, to read and to do math. But it's also going to test your ability to analyze and think criticaly. Unlike many tests commonly given in high school and college, the GRE is not merely testing your ability to reproduce information you've learned.

Instead, it'll test your ability to think and adapt. But don't worry, I'll explain much more about adapting in later videos. And since the GRE is timed, it will also test your time management skills. So the test itself has three kinds of sections. There are two 30-minute essays at the beginning of the test. And then two 30-minute verbal and two 35-minute math sections, each containing 20 questions. There will also be an experimental verbal or math section that can appear any point after the essays.

So, this experimental section will look just like a normal section, but will not count toward your score. And it won't be marked as experimental. In each of the verbal or math sections, you can work on the 20 questions in any order that you want. The test allows you to skip and come back to questions as you see fit. And then the total testing time is going to be close to four hours. So, again, when you get a chance, read more about the GRE on ets.org, where you'll find all the details about the test, along with some answers to the most frequenlty asked questions about it.

And in the next video, I'll go into more detail about how the test is scored.

Video: Structure of the GRE