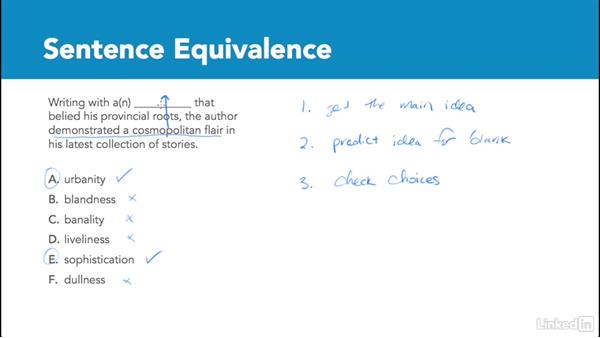 So, we're going to actually kind of follow the same steps that we would for a text completion and we'll just have to do one final difference at the end. So first, get the main idea. So if we look at this thing, I would say that the main idea that the author has this cosmopolitan flair. So we have an understanding of what's going on now. Then step two is we want to try to predict. So just to remind about prediction, it's just an idea, you don't have to worry much about the wording. So for this prediction I am going to just draw a little arrow from the word cosmopolitan and say that that's my prediction.

Just kind of keep it simple with the word in the sentence, which actually is a good idea, it keeps it from the deviating from the meaning of the text too much. So now that we have an idea it's time to go onto step three, which is to look at the choices. Okay, we need to pick two things. So, if something means sort of cosmopolitan flair, urbanity is a great fit for that. Blandness - no, banality - no, liveliness is positive, but it doesn't mean the same thing as sort of sophisticated and urbane.

So sophistication is great, and then dullness doesn't work. So I'm picking A and E, because they fit the clue. The author has a cosmopolitan flair would make sense that he is writing with urbanity or sophistication. And we have even more confirmation that that thing should contrast with provincial, which kind of means sort of unsophisticated and rural, since it belies or contradicts that provinciality. So, kind of the same technique that you should be familiar with to some degree from text completion.

But one major difference is you want to make sure that the words you pick really make the sentence mean the same thing or as close to it as possible. So just to review, like text completions, you can use the same basic steps. Read the question and summarize it. Predict an idea for the blank based on the text. And then verify support for your choices. So the key difference really is, in sentence equivalence, that multiple possibilities can sometimes make choosing or predicting an answer difficult.

You really have to look at the choices and make sure that those two choices are creating similar meanings for the sentence. Now what that means is almost always, I'd say 98% of the time, those choices you're picking are synonyms of each other. Once in a while you'll see two choices create similar meanings for sentences are not really great synonyms, but most of the time that's going to be true. So just a tip for this course. Most of my advice in Chapter 12, which is text completion, is also going to apply to sentence equivalence.