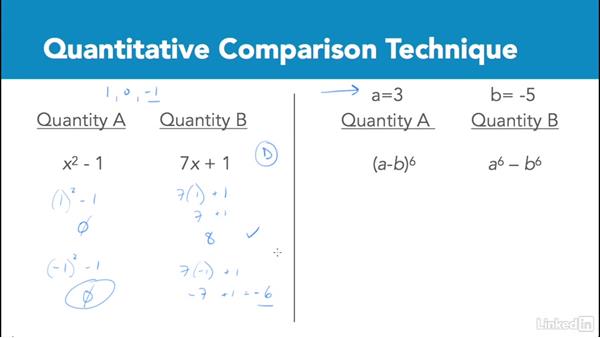 - [Voiceover] So in any given GRE math section, the first eight questions will probably be what they call quantitative comparison. In other words, you'll have to determine which of two quantities is larger, whether they're equal, or whether it can not be determined. In this video, I'll show you what these questions look like and give you some basic technique. So on the screen we have a couple of examples of quantitative comparison questions. They're always gonna kinda look like this with a Quantity A and a Quantity B. Sometimes, above the quantities you'll see some rules.

So for that second example, a is equal to three, b is equal to negative five. And sometimes these questions are just straight up math problems like a little word problem or something, but the technique that I'm gonna point out specific to this type, which is gonna happen when there's algebra going on, in other words, when you see a variable in the quantities. Cause if it's a normal word problem, you can just usually do the math without testing numbers. But what we're gonna do here for this first one, we've got Quantity A and Quantity B. We're gonna test numbers to make sure that what we think is true is consistently true.

So good numbers to test are often gonna be one, zero, and negative one. Not only are these easy to test cause they're small, but they produce sometimes different results and that's what we want. We want to make sure that if Quantity A is bigger that it remains consistently bigger no matter what we pick. So let's start off with by testing one. Quantity A would be one squared, minus one. That is gonna turn into zero. Then Quantity B is gonna be seven times one, plus one.

So look at that. This time, Quantity A is bigger cause zero is bigger than negative six. So now, since Quantity A was bigger for one test, Quantity B was bigger for the other test, we know that the answer is, in fact, D, which means that we can't determine it. So on the real test, you're gonna see choice A for Quantity A is bigger, choice B for Quantity B is bigger, choice C for if they're equal, and choice D, like this one, you just can't tell. So in this example over here on the right, let me point out another beneficial thing to do.

So we want to use logic when we can to see if we can avoid doing heavy, time consuming calculations. So look for ways to compare without calculating and look for ways to simplify things so that they can more easily be compared. And, for algebraic quantitative comparisons, just like we did for the first example, think about adding numbers to test different scenarios.