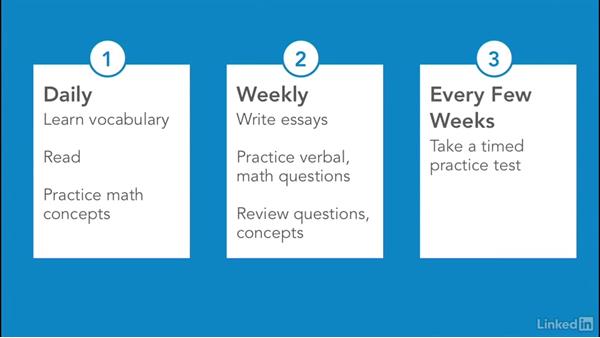 - [Voiceover] So once you have a general idea of what score you're starting with, and where you wanna end up, it's time to make a study timeline, so you're more organized about what to study, and when. So in this video, I'll explain how to plan and schedule your study time. Before I begin, keep in mind that different people need different timelines and emphases. So consider the following to be a sample, not necessarily a model. So let's say someone plans to spend a few months preparing for the GRE. Things to work on daily, probably include studying vocab, reading a variety of academic writing, and learning math concepts.

Things to work on, more like weekly, probably include writing an essay of each type, and practicing verbal and math questions. Make sure that you also schedule time to review, and explain previously done questions. It's probably a good idea to take a practice test every two or three weeks, so you can see how you're progressing. Make sure that you take or retake both Power Prep tests, which again, are the official ETS practice tests, toward the end of your prep, and that your prep continues up until your offical test date.

So I suggest using a planner or calendar to schedule tasks, and make sure that you schedule watching the videos in this course as well. One important tip: mix it up between essays, math, and verbal, and don't go too long without working on a certain part of the test, so what you've learned doesn't fade too much. Now when you're done planning, you should have scheduled about six practice tests to take, and determined when you're going to complete all the questions in the ETS books, that I'll explain and recommend in later videos, and figure out how many vocab words you're going to learn.

Finally, don't be afraid to revise your schedule. If you're making faster or slower progress than you initially thought, just look at your schedule again, and set new deadlines for things. Scheduling and sticking to your schedule, is one of your most important GRE prep activities, so take your time, and don't leave your prep schedule to chance.