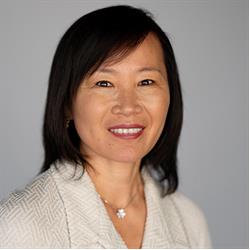 Haiyan Wang is managing partner of the China India Institute.

The China India Institute is a Washington DC-based research and advisory organization with a focus on the transformational rise of emerging markets, foremost China and India, and implications for key stakeholders. She has also been an adjunct professor of strategy at INSEAD.

Haiyan is ranked at #28 by Thinkers50 as one of "the world's most influential management thinkers." Earlier, she was listed by Thinkers50 in "On the Guru Radar" and short-listed for the 2013 Global Solutions Award and the 2011 Global Village Award. She has also been named a "new guru" by The Economic Times.

Haiyan writes frequently for Harvard Business Review and has also been a columnist for Bloomberg Businessweek. She is the coauthor of three highly acclaimed books: The Quest for Global Dominance, Getting China and India Right—which received a Silver prize in the 2009 Axiom Book Awards as one of the world's best books on globalization and international business—and The Silk Road Rediscovered.

Haiyan has served as a contributing editor for Chief Executive magazine. Her opinion pieces have also appeared in leading international media such as the Wall Street Journal, Financial Times, Wired, The Economic Times, China Daily, The Times of India, the South China Morning Post, as well as other outlets. She has been frequently interviewed by CNBC, the Wall Street Journal, Fox Business, India Today, CCTV, CGTN, CNN, China Daily, INSEAD Knowledge, and other prominent business media.

A native of China, Haiyan has spoken at major conferences such as Summer Davos, The Economist, Foreign Affairs, TEDx, CNN Expansión, Brookings Institution, and Asia Society, as well as Global Peter Drucker Forum events and corporate forums in the United States, Europe, Asia, and Latin America.