Viewing VR on your smartphone 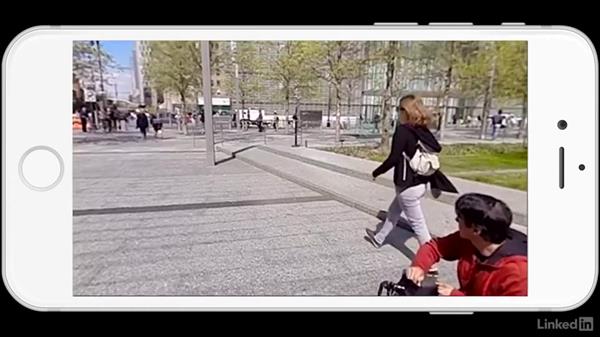 VR stills and videos can be viewed in a number of ways. One of the most common is with a device you likely already have, a smartphone. There are several sources of content online, and you can get an idea of the VR experience even without goggles.

- One of the best ways to get a sense of what's possible with VR is to look at what's out there. Publishers and photographers are trying to get a handle on what this technology is capable of, but already there are good sources of consistently high quality compelling VR productions. Your smartphone is an ideal platform for exploring VR, and a great place to start is with the New York Times. Available for both iOS and Android, the New York Times VR app makes it simple to get a VR movie playing. I've installed the app here on my phone. If I launch it it takes me right into a menu of the current content that they're pushing.

'Course I can go back and get to previous content. So here are kind of their top stories. So here's one of a guy climbing to the top of One World Trade Center. I can see that it's four minutes and 34 seconds long. It's a 168 megabytes. I'm gonna hit play on that, and I get a couple of options right off the bat. I can either download the whole thing, or I can stream. The advantage of streaming is that it starts playing right away. The disadvantage of streaming is if you're on a slower network, you might get some stuttering and stalling. So I'm gonna go ahead and download it, because the network here has been a little flaky.

I'm gonna hit the download button, and then just wait. The next thing is, it's asking me to choose my experience, and that can be either Google Cardboard, which means goggles, which we'll talk about in the next movie, or just smartphone. I don't need goggles, I'm just going to do my smartphone by tapping on that. Then it tells me to put on my headphones. There is audio with this movie. I'm not going to play the audio now. And it really is more immersive if you have headphones on. And with it loaded, it gives me a little countdown, and now the movie is playing.

Something just flashed by, and it says move your phone for the full experience. So here I am at the top of One World Trade Center. As I pan my phone around, the accelerators in the, the accelerometers in the phone are telling the VR app how the phone is moving, and it's panning about that spherical image, so that it really feels like I'm kinda looking into this window on the world, with my phone here. Wait it just went black. Oh, the scene has changed. Remember this is not real virtual reality, I am not in control of where I am.

Oh and here's a guy unpacking a camera bag, with a little graphic behind him. This is the weird thing about this iteration, or this concept of VR. I can't actually move around. I can't decide much about what I'm looking at. I am following the filmmakers idea of what needs to be shown, but within that idea I can pan and, oh it just changed again. I can pan about and look around. So it takes awhile to really figure out what's going on here. I'm not in a true virtual reality space, I am within a 360 degree video that is being shown to me.

And as you just saw, I was looking that way when the scene changed to these guys over here. One reason you need headphones on is that you might be looking over here, and suddenly hear someone talking. It worth at that point, panning about the scene until you can find where they are. The New York Times is creating a lot of interesting immersive VR movies, but, being the New York Times, they're generally staying with photo journalistic content. Vrse's Within app offers a similar assortment of photo journalistic content, but they also offer a good assortment of documentaries.

For examples of VR as a narrative tool, you might consider Sisters, A Virtual Reality Ghost Story, while Orbulus app give you VR views of interesting vacation spots around the world. Jaunt VR, and RYOT are great sources of the same type of material that you'll find in the Vrse app. All of these apps are free, and they're available for both iOS and Android. If you find yourself frustrated by the small size of your smartphone or your tablet screen, then you're gonna want to consider some VR goggles.

Part of what makes Jpeg files so ubiquitous in the world is that there's a defined standard for recording and displaying them. VR doesn't yet have a generally accepted standard, but Google has kinda gotten out in front early with their Jump platform, which is a specification for the shooting, and the playback of VR. What makes Jump especially compelling, is that Google has added Jump support to YouTube, so it's possible to find a lot of VR content on YouTube, just do a search for VR. And now Facebook also allows playback of VR content.

You can do searches there to try and find the same sorts of material.

9/13/2016
Virtual reality can transport you across town or around the world. And it's easy and inexpensive to test the (virtual) waters—not only as someone who views VR content but also creates it.

In this course, photographer, educator, and author Ben Long introduces the essential concepts and tools behind photographic- and video-based VR. After detailing a brief history of VR, Ben shows a sampling of inexpensive VR viewers (such as VR apps and VR goggles for your smartphone) and where to go to check out great VR content. He also reviews the tools and techniques for creating your own VR photos and videos, and dealing with challenges in post-production, such as moving media to the computer, stitching and mapping 360-degree images and video, playing back VR video, and sharing VR content online.

Video: Viewing VR on your smartphone