About the Price Tower location 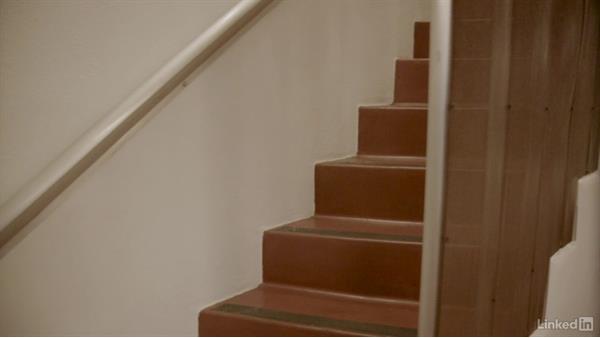 - I'm sitting here on the bottom floor of a two story suite of the Price Tower, seven stories above the ground. When we decided to do a VR course, I immediately thought of this building, which I'd been to before, because it's got beautiful spaces, but also, because it's spaces are somewhat confounding. It's hard to capture the layout and relationships of the lines in this space using normal still photography, so VR seemed an ideal way to record the visual experience of what Frank Lloyd Wright created here.

Wright originally designed this building to sit in the Bowery in Manhattan. The depression killed the funding for that project, so he mothballed the plans for 20 years, until an Oklahoma oil man named Harold C. Price commissioned Wright to create a new headquarters for his HC Price company. Wright dug out his plans for what was originally supposed to be a Manhattan skyscraper, and came here to Bartlesville to build it. And he referred to this building as "The tree that escaped the crowded forest." Partly because it was a skyscraper removed from Manhattan's forest of skyscrapers, but also because he intended to mimic the architecture of a tree.

But one of the most interesting things about the building, is that it was designed around a grid of repeating parallelograms. Every wall, interior and exterior, every staircase, even the furniture that Wright designed for the building, follows this grid. You can actually see the grid on the floor throughout the building. Because of it, there are, for the most part, no right angles anywhere in the Price Tower. Even the inside of the elevators lack right angles, it's 30 and 60 degree angles wherever you look. That's part of what makes some of the space in this building confounding, when you're standing in it.

This grid also makes for a lot of, honestly, useless spaces, or spaces that are preposterously small, such as this half bath, which feels more like and eighth bath. But these odd angles also contribute to these rooms feeling like natural spaces. Wright was a spelunker, and so had an aesthetic for rooms that weren't rigidly geometrically perfect. So, even though these grid lines originally adhere to, in Wright's original design, the upshot of them are rooms and hallways that turn, and ramble, and change size in the same, natural way that a forest, or a cave does.

My hope is that approaching this suite with VR will let me get a more accurate evocation of these spaces than if I use still images alone. Price Tower has a fascinating history. It was abandoned for 10 years, came close to being torn down and replaced with a parking garage, and many more fascinating details beyond what I've shown you here. It's original design included a drive-through, where residents could pick up their mail before parking their cars. And in typical Wright fashion, there was uncomfortable furniture, and even an area designed intentionally to leak, as revenge for a compromise he was forced to make.

Wright designed very few public buildings, so there aren't many places where you can gain direct access to his work. As per it's original design, the Price Tower is a multi-use building, and it now includes an inn! Making it the only one of Wright's buildings that you can live in for a bit, without having to go buy a Frank Lloyd Wright house. If you're passing anywhere near northeastern Oklahoma, it's worth a trip to see this fascinating piece of architecture and history. In the meantime, hopefully, we're going to make some VR movies that will give you a better idea of what this room is like.

9/13/2016
Virtual reality can transport you across town or around the world. And it's easy and inexpensive to test the (virtual) waters—not only as someone who views VR content but also creates it.

In this course, photographer, educator, and author Ben Long introduces the essential concepts and tools behind photographic- and video-based VR. After detailing a brief history of VR, Ben shows a sampling of inexpensive VR viewers (such as VR apps and VR goggles for your smartphone) and where to go to check out great VR content. He also reviews the tools and techniques for creating your own VR photos and videos, and dealing with challenges in post-production, such as moving media to the computer, stitching and mapping 360-degree images and video, playing back VR video, and sharing VR content online.

Video: About the Price Tower location