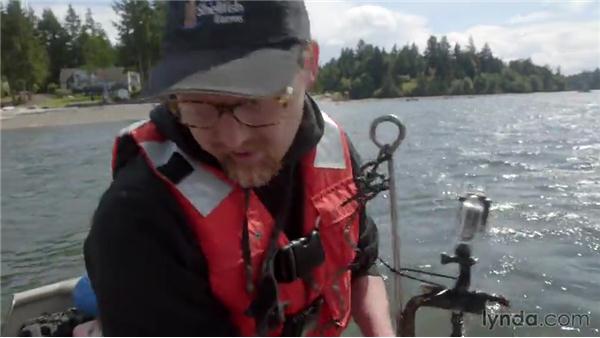 …Before I could wrap my day with the shell fish farm, I needed to go back out on…the water and grab the time lapse camera that I had set up at low tide.…I was a little bit nervous about that even though I had put some zip ties and…anchored it.…I also decide you know what, if we're going to pull this camera out.…I might as well stick another GoPro on the painters pool and…film that coming out of the water, just for fun.…So we did that, we had the go pro intact, and…I think we got some good footage from it.…On the trip back to shore I thought, you know what?…This story doesn't quite feel finished, and…you know at the end of the day this is a process story.…

We've got everything from the workers out here actually finding the oysters to…the mussel operations out on the platforms.…Now I want to see the actual end product.…Luckily the facility has a small shop on site.…So I decided to take the go pro in and…actually get some pictures of the sea food in the display cases.…It seems really simple but in editing this project what im going to…