Using the GoPro for an interview, and lessons learned 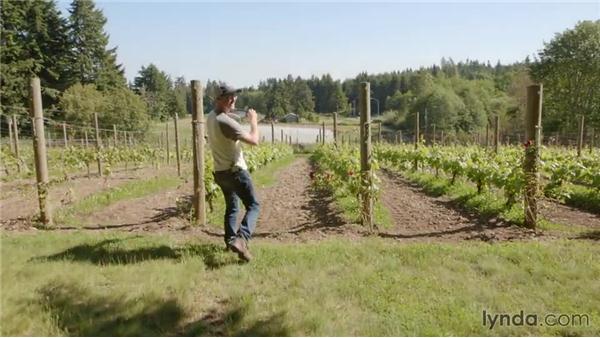 Join Paul Taggart for an in-depth discussion in this video Using the GoPro for an interview, and lessons learned, part of GoPro: Creative Photography and Video Techniques.

…Before leaving the vineyard, I knew that I needed to get an interview with Mike,…the owner.…I needed that audio track to run underneath my multimedia project.…But I also wanted a good video image, whether I was going to use it or not.…So I set up again, just like I did at the farm yesterday.…I set up a couple different cameras.…So I did it a bit different.…Today, instead of putting the modified GoPro with…the switchable lens mount on top of my DSLR.…I put it on it's own mount on the table.…So it can a little bit of a different angle than my DSLR in case I…actually want to intercut them.…

>> I am Michael Lempriere, I am Perennial Vintners.…I am amongst Washington State's smallest commercial vineyards and wineries.…My claim to fame is that I am the closest commercial vineyard to…downtown Seattle and…>> After setting this up, I realised there was a couple problems.…I used an arm mount with the modified GoPro on it for the switchable lens mount.…And I noticed that every time Mike would touch the table,…it shook it a whole bunch.…

Video: Using the GoPro for an interview, and lessons learned