Understanding the LCD status screen on a GoPro HERO 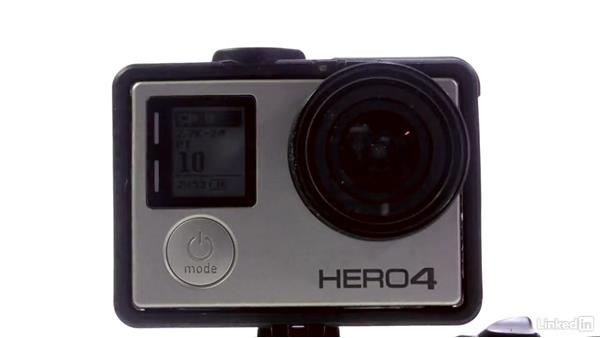 - On the front of all GoPro cameras with the exception of the Session is a LCD status screen. This screen is small and you might have a difficult time reading it, but many folks find it useful as it does contain all of the critical information that you need. Let's work our way from top to bottom of the screen. At the top of the screen, you'll see the actual camera mode that you're shooting in. In this particular case, I'm in video mode, but you'll notice as we switch between modes that the icon will update.

For example, photo mode, multi-shot mode, which could be things like time-lapse, the ability for playback, which will actually just take over on the back of the screen or playing out to a monitor, and set-up. Let's cycle back here to video mode. As you change modes, the camera will go ahead and show you a different icon in the upper corner to let you know which mode you're shooting with.

Next to that is going to be information like field of view. For example, in video mode here, we're shooting with a medium field of view. If I switch to photo mode, you'll see that that's configured for a wide-angle field of view. Remember some of your shooting formats can switch from wide to medium to narrow to really punch in on the action. This could be useful cause it also cuts down on distortion and makes the shot a bit more intimate.

Below this, you can see the capture mode. In still photography here, I'm currently set-up to capture with a seven megapixel image. Let's switch back to video, and you'll see that this particular camera is configured to capture at 2.7k at 24 frames per second. That line of information lets you know how the camera was properly configured. Remember if you want to change that you can always use the settings button that you just learned about.

This'll make it easy to then switch between the different modes and change options like frame rate or the field of view. To exit, I'll just push the settings button again, and you'll see that it updated to the new field of view and the other changes that I made, or if I did make changes, would be reflected.

The PT icon indicates that we're recording with Protune. Protune enables advanced options for controlling the image quality as well as things like the color settings on your GoPro camera. We'll discuss it more later. The next number indicates the current shot that you're on. Right now there are ten video clips on this camera. If I press the shutter button, you'll notice that the display changes, indicating that we're recording.

I now see a counter and an indication below of the approximate amount of record time left that can fit on the memory card. When I stop recording, you'll notice that the counter has gone from ten to 11. Next to that is a battery indicator. This tells you how much battery capacity is left on the GoPro. We're just about due for a battery change on this one. Remember as you record, by default, the red light will indicate recording.

This lets you know that the camera is actively rolling. In this case, there's an indicator light on the front of the camera as well as the top, the back, and the bottom. These can be configured in the set-up menu. If you engage the WiFi mode on your camera, you may see the blue light come on indicating that a WiFi network is either active or being configured.

Remember depending upon the mode you're in, you'll see different choices. If you go into the set-up menu, there are a lot of options, and you'll find yourself using the front LCD to understand those. Remember just about every version of the GoPro other than the Session contains this menu. While this front LCD screen is a bit small, it is an effective way to tell what's happening with your camera, particularly if it's in a case or if you don't have an LCD back or a built-in LCD screen to monitor.

This front menu is going to be the best way to tell what's happening with your camera if you're not using the back screen or the remote. While a bit small, it is effective. Let's press the settings button to exit and the menu is restored to give us a status update of how the camera is configured and its current count for shooting as well as capacity for recording and the battery status indicator.

Video: Understanding the LCD status screen on a GoPro HERO