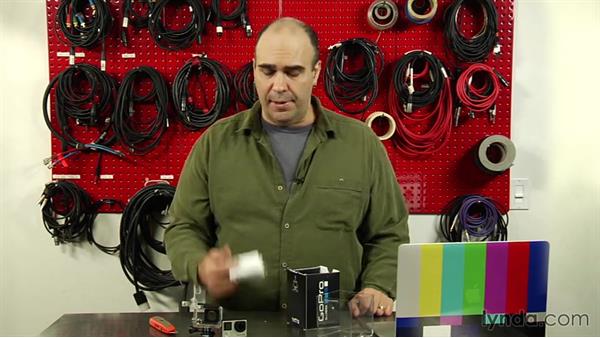 Additional features, like the rear integrated display, a superior menu system, and the capacity to capture 4K at lower frame rates, make the GoPro HERO4 Silver a popular model. The paper wrapper on the outside has information about frame rates you may want to refer to from time to time. In this online video on unboxing the GoPro HERO4 Silver, you'll learn about the box contents and what the GoPro HERO warranty covers.

- All right, we've got the brand new GoPro silver here and this is the current edition, the GoPro 4. Now, a lot of you are wondering what's different between this and the previous generations. Well, this one's still caps out while it can shoot 4K at the lower framerates. Essentially, it's very much like the 3 + except it's got one important new addition as well as a much better menu system. That new addition is an integrated display on the back here, so that's not an optional accessory.

Now, with the list price of $399 this is a pretty popular camera, and if you primarily just need 4K occasionally, this is gonna be a perfect camera. All right, well, let's unwrap it and see what's actually in the box. To start, we're gonna cut it from the bottom and remove these tabs, so get yourself some sort of cutting tool, either a pair of scissors or a straight razor, and just carefully remove any tape marks or seals. Remember, these are often properly sealed up to cut down on theft in retail stores. All right, once I've got that open, you'll notice that there's some seals here on the side as well.

So, just carefully cut those. Here we go, and you might want to remove this box and actually save it. You'll notice that one the box itself there's actually some particular details about the cameras and the frame rate. Not a bad idea just to cut this chart out and actually put it in your camera bag. It's nice and quick reference. We've actually got some call outs here on the particular features. I'd cut those out and set them aside as quick reference cards in your camera bag. All right, on the side here is one giant piece of tape and there's actually a pull tab to make this a bit easier.

Just start to pull back carefully... and be sure to keep both pieces. Now, when you remove this keep this cube. This cube is great to hold accessories 'cause there's lot of little pieces in here. So, as you unbox, keep this, and you might find yourself putting on the shelf as just a storage bin. All right, to remove the camera, I'll push and this slides out. In fact, it comes out a little bit easier than previous generations.

The camera itself is included in the case. It's very much like the GoPro Silver and the GoPro Black for the 3+, a single latch case. And this allows you to open that up, flip down the door and remove the camera. Now, it's a little bit of a snug fit, particularly when it's new, but if you grip it carefully with your fingernails, you can remove that. All right, we'll explore the cases and some of those options more in a little bit later. Now, you might think you're done but there's actually a whole bunch of stuff inside this box, so, don't just pitch this.

I recommend you get this lid off and keep this. I usually just take this and tear it off, and I'll use this as a stand later. It's another GoPro mount that works particularly well for tabletop shooting. Inside of here is some paperwork. So, as you first unbox, you're gonna see a getting started with GoPro book, real quick reference guide. A little bit more detailed manual, also called the Quick Start guide, and some GoPro stickers so you can label your stuff. There is a detailed safety information and a warranty book.

So, don't discard this paper. You're gonna wanna keep that warranty in case you have any issues that are covered. Of course, many of the things you would do with the GoPro like take it deep underwater or attach it to a skateboard, physically abuse it, aren't actually covered by the warranty. It's just designed to cover things like normal wear and tear and things really just falling apart or being corrupted or coming out of the box in a damaged state. All right, I'll set that aside. We can open this up here, pulling that notch, and just carefully dump this out.

I recommend doing this on a table where you've got a bit of room. Inside of there are two doors. The first door is pretty cool. Now, the normal GoPro case is a hardback, designed to protect the screen, but they do give you an optional one here that has actually the ability to touch through. This will allow you to operate the GoPro menus on the touch screen while it's in the case. Now, some of you might be saying, "Touch screen?" If you didn't previously own the optional LCD touchscreen which was relatively expensive, you might not have realized that you can operate the GoPro menus by touching the back.

I personally find that a lot easier than the button system here with the tiny little screen and icons. But, this is now integrated and built in. This a touch screen that gives you a lot of control. Besides that, there's one more door. And you'll notice that this one is cleared. This is designed to let the sound through to give you better audio but provides the least protection for the camera. All right, we've got a couple of mounts to get you started, the standard sort of stuff.

They give you one curved mount and one flat mount. If you've checked out some of the other GoPro courses available here on Lynda.com such as our Action Sports one or our vehicle one where we take a look at cars and motorcycles, You realize that you need to let these adhesive mounts dry. So, make sure you give these a chance to settle and don't just slap them on something and start shooting. They need a good twenty four hours to be properly adhered. Besides those two mounts, you will find that you get a stopper. This stopper is just designed to prevent the screw from loosening and we'll take a look at that a little big later.

You've got another GoPro mount so besides the flatter mount here that comes, you actually get a curved mount, and the curved mount is useful to lift the camera up a bit and give you some extra coverage. Additionally, you'll see that you get two knuckles, and this is kinda cool. This gives you some flexibility so if you really need to get that camera taller, you can, or you can split these apart. The benefit of breaking this apart is that it makes it easier to attach the camera one way but have it point another way such as this way off to the side.

This'll give you a little bit of flexibility if needed, so you can get additional angles of coverage as well as angle this or turn it to match your needs. Now, besides the mounts, the adhesive, and the two feet, you'll find a USB cable. It is still a USB2 connection. So, unfortunately, not very fast. If you need to get a lot of data of this, I recommend removing the card, putting it in a dedicated card reader, connecting it to your computer directly, or using a faster USB3 card reader to get those fast transfer speeds.

And one more thing, you get a battery. Now, a single battery is not gonna last you that long with this camera, so I would recommend immediately buying some more. You'll also notice if you're a long time GoPro user, the form factor is completely different. It'll go into the bottom of the camera now without things removable. In the past, you used to have a door on the back here but you'll see with that integrated screen they obviously had to change the form factor and go with a different battery. All right, that's what's in the box.

Put some of those spare parts you don't need away and I'm gonna keep the camera body out and the battery out, as well as the case, to walk you through a few additional options.