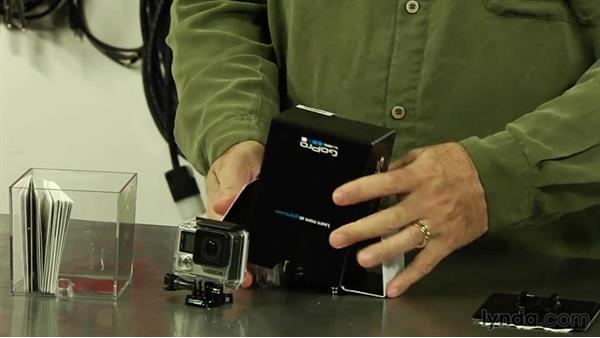 When unboxing the GoPro HERO4 Black, first separate the paper case from the rest of the package. You'll find a quick reference guide printed on one side of this case. It contains information about key camera features, as well as a shooting guide for the frame rates you can use with this GoPro HERO model. This online class teaches you how to unbox the camera without dropping it, discusses the uses of the inbox contents, and the advantages and disadvantages of using the cut-out case.

- Okay, we're going to take a look now at the new black version of the GoPro 4. Let's start by unboxing this, it's pretty similar to the two versions. Again, you want to be very careful, so I recommend on the bottom you find the tab here, there's going to be a little tape tab, and use either a pair of scissors or a straight razor, just be careful with what you're doing. And carefully cut that. Once that's done, you can pull that apart and you'll need to take care of two more tabs. There's a little tape tab here on the side and one on the other side.

There we go. We just cut that carefully. Once that's done you can pull that across. Now remember, on this there are some useful things. You'll find a quick reference guide to all the key features and I actually like to keep this card here, so that I can use this for a quick reference shooting guide for all the available framings. Just cut that out and put it in your camera bag. And you'll notice here that we need to take off one more piece of tape. There is a pull tab here, so just be very careful, pull that off (tape ripping) and set that aside.

You can now lift the two pieces apart and I recommend you save this cube. Again, it's a useful way to store some of the accessories. I'll put that to the side and then you can pop the camera off. Now unlike previous versions, this is a lot easier to get off. You just pinch the two pins in the back and the camera will release, I just recommend keeping a hand on the front if you're not experienced with this, so you don't push the camera off onto the floor. Set that aside and just start to lift up. Now I'll usually tear this off and just remove the paper pieces, you can clean this up a bit later.

This actually makes a nice tabletop shooting platform, you can set that down and easily attach the camera. Alright, handful of books, same as before. A getting started guide, a quick start guide, so one's even shorter than the other, some stickers to mark your stuff, and of course, a detailed warranty guide, as well as some safety instructions. GoPro just wants you to keep your safety in mind as you're using the camera and addresses things like make sure that you're not adjusting the camera settings while riding a skateboard, looking at the screen instead of paying attention to where you're going.

They talk about some of the other things like one button mode to make easier to get the camera up and running. Pretty straightforward stuff that you'll want to keep an eye on. Alright, I'll just put that in that container there and if I'm careful I could pull this apart and it opens up and we'll just dump it out. Alright, the inside's near identical to before. We've got one back instead of two. Now you might be wondering, "Why is there only "one camera back while I got two with the GoPro silver?" That's because this camera does not have a touchscreen.

Now you can use the optional LCD back that was available before and still connect this and use the extended back cases, all of those options, but this is just a skeleton type housing. You'll notice that it's cut out, making it easier to get sound into the camera. Of course, it's also easier to get dust or water, so be mindful when using this cut out case. Really it's more for indoor shooting or very controlled environments. You'll find a USB 2 cable, again for fastest speeds, pop the card out of the camera, connect it directly to a computer using a card reader for better results.

And some extra knuckles, so you can reposition the camera. We've got a curved mount, this is great for the chest mount or other ones where you want to get the camera a little higher, or perhaps handlebars. And a couple of extra knuckles so you can reposition the angle of the camera for some tilt. You'll find two GoPro mounts, same ones as before. One starter one here for both curved and flat, you can open that up. And you've got an actual lock. Now I mentioned this lock earlier, let me explain the idea behind it.

If you take this, the goal is that you can put this on the actual camera itself. So you pull this out, pretty straightforward. You'll also notice in the bottom here, there is a piece labeled Remove, so be careful to take that out, that's just a little extra piece to keep the camera from flopping around. You're going to take this and just slip the thread over the thumb screw here and then reconnect.

Line that up. There we go. And twist. Now the benefit once that's connected, is you can take this piece and wedge it in there and if you put it in there firmly, it's just a little bit of extra stoppage to prevent this from turning. You'll have to wedge it in there pretty well and get it up there into the thumb screw area on the thicker part, but if you push it into that spot it's just a good way to sort of lock that screw.

Now you might be wondering, "Why did the GoPro silver "get an integrated screen and this one didn't?" Well, we'll take a look at the form factor next.