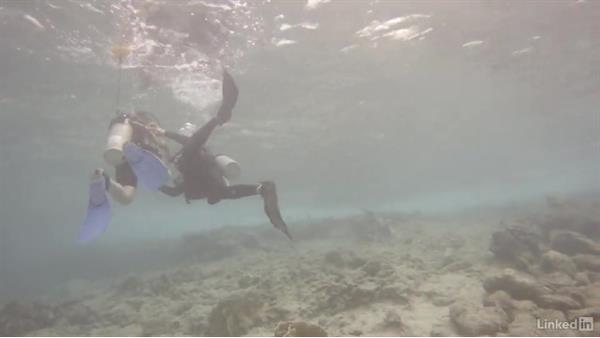 - One of my favorite things to do is go scuba diving or snorkeling. And my GoPro often accompanies me. In fact, my kids love to shoot with GoPros underwater, and we get some fun footage to catalogue our trip and to save memories. Now, on its own the GoPro may, or may not be waterproof. If you're using the GoPro Session, well, that's waterproof and that's good news. But if you're using one of the other models, it needs to be in a case. And even if the GoPro Session is waterproof, there's a couple things you could do to make it a bit safer.

Let's start with the Session. One of the things I can do, is take the GoPro Session, here, and actually insert it into a floating case. 'Cause while the camera's waterproof, it will not float. So, easy enough, I just take this and slip it in. And you'll notice that the mounting point sticks outta the bottom. If you're using the rear mount, you can also put it out through the back, there. Now, I could easily take the GoPro handle, or one of the third party tools. This makes it simple to attach.

There we go. Now, we've got a unit that's designed for underwater shooting. Importantly, you have a wrist strap. This means that you can keep this on your wrist to cut down on dropping the camera. Sometimes when you're out there shooting, you might need your hands underwater. Now, we can let go and the camera is still attached to my body. I don't have to worry about losing things, it just dangles. So having it attached makes it really easy.

But I've got this here, and I could easily go ahead and shoot. What's also nice, though, with this floaty unit attached, and they do make this for other cameras, if for some reason I was passing the camera to somebody else so they can shoot, and I were to let go, well, it would slowly float. This will keep it relatively neutral buoyant. Now, besides the ability to create this for floating, and this works great in a pool, you can also adjust your GoPro for shooting underwater. Sometimes when you shoot underwater the water will affect the white balance of the camera greatly, so you need to use a colored filter.

And these are available both from GoPro and third party manufacturers. What you'll be able to find are filters like this. Here we have a smaller one that's designed for the newer GoPro style case. This allows you to easily slip it over, the newer style case and attach it, and then take this thread here, and simply attach it or tie it around the knuckle, or the base. Now, this works well, but keep in mind that this particular case, while standard on the new GoPros, is not as waterproof as this case.

40 feet, 60 feet. So, if you're going with the older style dive case, there's actually additional filters that you can get. Same idea, line it up, and snap it on, and you see that we've got a protective filter there. And this'll come in different colors and densities depending upon the water condition. Now, using something like this isn't totally critical. A lot of times after the fact, you can of course white balance in post, and you still may find the need to adjust the white balance, either in GoPro Studio or your editing tool like Final Cut Pro or Premiere Pro.

But having a color filter like this can often greatly help when it comes to contrast issues, and removing some of the most offending color cast. I strongly recommend step up from the base case to one of the better underwater cases. Not only because it's better under deeper depths, 60 feet versus 40, but look at the latches. A single latch here? I've gotta tell ya, more than on one occasion (latch snaps) has a child popped that underwater, and water goes flowing in.

If that happens, your camera is dead. On the other hand, with a device like this, it takes a little bit of skill to get it open. It requires you to first push this lever to the side and then lift this lever up. It's a two-part action that is much trickier to open. You'll notice simply pulling on this will not open the case. Sure, if you rip hard enough, it will eventually come open, but for most people it's gonna take a slide, and then a lift to open up the case.

And that extra level of protection is what you want.