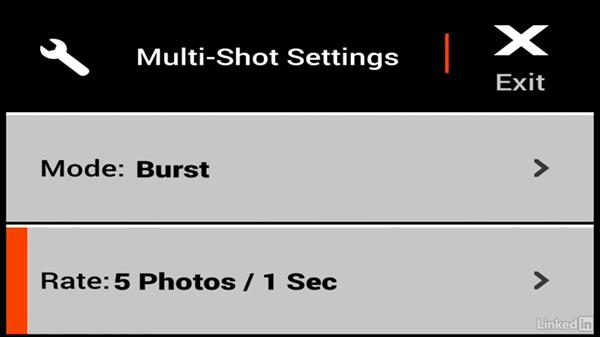 - One key benefit of your GoPro is its ability to capture several images in burst mode. Now, the exact combination may vary slightly between camera, but the burst mode is quite useful, as it allows you to choose the number of frames you want to capture and the time interval. this will allow you to shoot up to thirty shots, and spread them out over one, two, or three seconds for example. Or maybe to shoot ten shots over the same time interval, or five shots. To access the burst mode is pretty simple, you're going to actually find it under the multi-shot mode.

This can be accessed a couple of different ways. You can do this using your remote app, the on-screen menus, or the front menu screen. With burst mode, for example, on the GoPro black here, you'll have the ability to capture a certain number of photos that will vary the spread. For example, three photos will go over one second, five photos over one second, you can spread ten photos over one second or a two second duration or even three seconds if you want to slow it down, and at the highest mode thirty photos could be spread out over a one, two, three, or six second duration.

Now the great thing about burst mode is it works very well for things like sporting moments. For example, a finishing line, or an area where somebody's going to be doing a trick or a dance move. You simply place the camera to get a good shot, and then using your GoPro remote or your app on a tablet or smart phone, you can push the button to trigger the camera. this is much faster than a DSLR, and even faster than some of the high-end mirror less cameras. Now remember, burst mode is quite useful. so if you need several bursts back to back consider using a lower megapixel count.

Burst mode from GoPro offers a feature that outperforms many higher-end cameras. Think about some of the creative ways to capture a moment and this will open up new projects and new ideas for your GoPro camera.