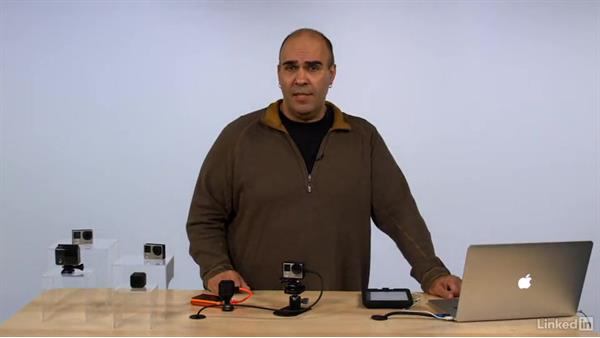 - The next major choice that you need to make is resolution. Now we've already talked about frame size a bit but the bigger the size, the more power gets used by the camera and this means it's going to drain battery life. Some of the GoPro's have the ability to shoot up to 4K video and that could be quite useful. On the other hand, if you're going to be stepping down to some of the other versions, such as the entry model, it's going to top out at HD but there are some sizes in between. Now finding the right camera is really a tricky pick here.

You're going to have to decide between if you've got the budget for something like the GoPro Hero Black or Silver edition or if HD is all you need, well, then maybe one of the other cameras is a good fit. 4K video is becoming increasingly popular and it is a viable method for delivery. Alright, let's go a little bit deeper here on choosing the resolution. As you move through the menu here, you'll find several choices. The smallest quality is the wVGA option and this is essentially for multimedia projects.

It's less than high definition. Now if you choose 720, that's easy enough. This is the 1280 by 720 frame size, often called 720p, and it's commonly used for delivering video particularly to the internet. If you want a wider screen view, you could choose the 720 SuperView but you'll need to process this clip using the GoPro app to take advantage of the SuperView setting. It's essentially an anamorphically stretched clip and it gives you the ability for an even wider field of view.

The next option to shoot at is 960 which is falling somewhere in between 720 and 1080. This could be useful if you're delivering 720 but you want just a little bit of overscan for cropping. Shooting 960 means that, if needed, you can crop a little bit off of the video during post or add a small zoom to it but it won't consume up as much disk space and the card space on the device itself as shooting 1080. The next option is shooting at 1080 or 1080 SuperView.

These two frame sizes will give you the larger HD flavor which is most commonly 1920 by 1080. Remember, if you're using SuperView, that image will need to be processed as well with the GoPro desktop app. We do have a complete course available here in the library that will walk you through how to use this app and show you some of the things that you need to do in order to optimize the footage for use and other editing tools. So be sure to check that out if you're interested in SuperView or even just processing the footage for different nonlinear editors.

Now there is one more size above 1080 and that's a size of 1440. Again, this is useful if you want something that's slightly larger than HD and you need the ability to crop. One size that's not very standard is that of 2.7K and this is a good balance here. This will give you the ability to crop for 2K workflow or if you need a little bit of extra reach and this works out pretty well, particularly if you're attaching the camera to an aerial device and you know you're going to need flexibility during post-production.

Now with some of the cameras, the Silver and certainly the Black, you're going to get access to that coveted 4K resolution. If you're shooting on a Silver, the frame rates could be a bit more limited because it only has a single processor but if you're using the GoPro Black edition, well, then you're going to get full frame rates, like 30 frames per second, which will give you the ability to actually shoot professional quality 4K video. Now this is going to give you something that's pretty much acceptable in many cases and if you're dealing with a broadcaster, the 4K from a GoPro is often used for special insert shots, point of view, things like sports or other shooting environments.

Let's go in and talk a little bit more about frame rate so you'll understand all of your choices.