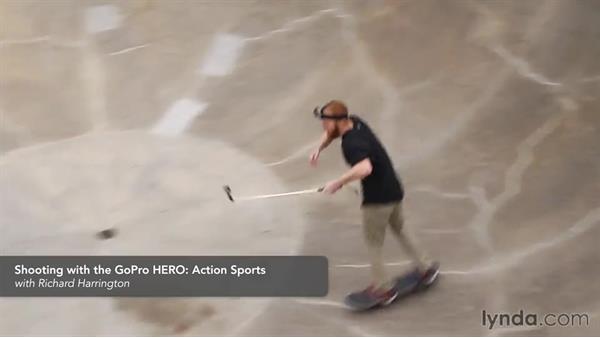 Adjusting the capture rate for still pictures or video makes a big difference in the overall look of your finished project. Action shots and slow movement shots need to be caught at different rates. With GoPro, you can do this by adjusting the time between still photo captures or the video frames per second. This tutorial shows you how to capture just the right look with the new video and burst frame rates in GoPro HERO

- One of the big areas of growth for GoPro is increases in the high frame rate or burst modes. High frame material is become very popular. Partially because of devices like this. 240 frames per second on the iPhone 6. Well, the good news here is that GoPro now has that feature too. If you have a GoPro Black, which has those dual processors, you can now shoot 720P at 240 frames a second. This is pretty awesome because it leads to some really cool slow-motion effects.

You could take that footage, stretch it out, and really see what's going on with it for some cool stuff. Additionally, the 2.7K frame-size material on the GoPro Black, also supports 60 frames per second now. 2.7K is very useful for shooting things like sports or things where it's difficult to know how exactly to compose the shot. By shooting with that extra spillover you've got room to crop the shot, after the fact, and really punch in on the action.

Whether you're delivering 1080 or 720 the 2.7K frame size gives you lots of extra pixels so you could recompose for a sloppy shot. Particularly if say, it was mounted on the front of an athlete or you had it attached to the outside of a vehicle. Remember, we've got some great courses here on lynda.com, exploring things like sports workflow or attaching this to a moving car or motorcycle. And in those particular situations using the 2.7K frame size is quite useful. Now that it supports 60 frames per second, this is gonna come in handy because it adds the ability then to do some slow-motion effects as well, with that larger footage.

Now, if you have a GoPro Silver or a Black you will see an increase in the overall quality for photos. Remember, the GoPro can shoot a high-burst frame rate of still images. You can now spread that out over 6 seconds. I've always loved the burst rate. We've used it in the past to do things like capture a skateboarder doing a trick. But sometimes if you're shooting some types of sports, two seconds is not enough time to capture the action. This is gonna particularly come in handy for things like sports that involve longer action.

And this will allow you to capture more of the scene and still have lots of choices when you go to evaluate the stills. Speaking of shooting stills, the GoPro now actually recognizes if the camera was rotated. That's great, so it's actually got a little bit of a level inside there and it's tagging that into the metadata so that gets handed off. Alright, well, that's the impact there on things for shooting stills or video with new frame rates, but, speaking of frame rates there are some changes for time-lapse shooters.