Getting detail shots of the vineyard with a GoPro 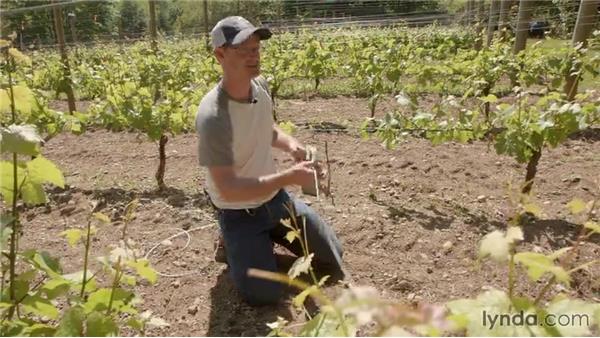 Join Paul Taggart for an in-depth discussion in this video Getting detail shots of the vineyard with a GoPro, part of GoPro: Creative Photography and Video Techniques.

My main focus today, coming out to this vineyard was to get some really great aerial footage. Once I knew that I got that footage that I needed, I realized you know, I also need some images down on the ground. I need Mike's hands in the dirt working, him weeding, all this kind of material. So I got my goPro. I just handheld it with my little LCD screen on the back, and I got all the images that I needed. I also shot a little bit of video. In doing so, I wanted to change up my composition. Just like I do with my DSLR. You don't just go in and get one image, you work the scene.

And one of the things that I loved about this location were all the leaves. And this is a story about plants. And so, I wanted to put the camera, and the GoPro allows me to do this, in unusual spots. So I got really low, and I put the camera right in the plant. So the leaves really create a border all around the edges of my frame, and then I have Mike in the middle working with his hands. This is when I first thought about farming as a story. Some of the images I was thinking about visualizing were people just getting their hands dirty, working in the earth.

Today I feel like I really got that. That said, I still wanted to get a couple other things while I was here at this location, because if you don't get it done while you're here, sometimes you can't ever come back. And our schedule is really tight, so I wanted to get everything I could out of the daylight that I had. So I set up a zip line. It's kind of a funny-looking rig, and people look at you funny when you, see you with this camera rolling down a line. Sometimes it works, sometimes it doesn't. The way this zip line works is it's just a line, very cheap, that I got at a hardware store.

I also got two little wheels that I attached to a metal plate with zip ties, and then I just put a magnet mount with the goPro on the bottom. Put it on the line and send it down, just like when you were a kid at camp and you'd get on a zip line and you ride it, just as much fun, except this time, it's with a camera. I tried doing it by myself, which is a little bit difficult. I lucked out at this location because there is such an elevation change that I could start with the camera in the high end, hold the, the line high enough, and when I brought it down, I could control the speed of that camera as it went in between the plants.

Like everything with photography and filmmaking, there's a learning curve. The first couple times that I tried the GoPro on the zipline, I realized there was too much shake in the line. What I would made sure is when I'd send it back to A, I'd have to stabilize that line for a little bit, calm down, and then slowly let it down. I can always speed it up in post. But if I do it slow enough, it eliminates that vibration. Using a zip line is a little bit more difficult than say, using a quadcopter that's got a really nice gimbal on it. But then again, a quadcopter with a nice gimbal costs a few more bucks than just going to the hardware store, buying some line, a couple wheels, and a few zip ties.

So, again, I hate it when I hear people say that, you know, I just can't afford to do some of the things that other people are doing in photography and filmmaking. Almost anybody can go out to a hardware store and for a couple bucks, make a zipline. So there's always an obtainable way to the end result that you want in your image or storytelling, you just have to have the mindset that you really want to do it, and figure out a new solution. Don't always just allow the technology and the expense of it, stop you in your tracks. Go out there, do it, and figure out a way to make it happen on your own budget.

Video: Getting detail shots of the vineyard with a GoPro