Getting the GoPro in the water 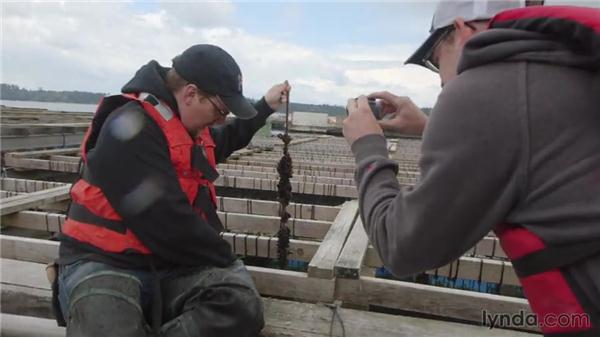 Join Paul Taggart for an in-depth discussion in this video Getting the GoPro in the water, part of GoPro: Creative Photography and Video Techniques.

When Marco told me that he had a boat for us that we could use to go out onto the water, where they have some floating platforms where they do all their work mussels. I was excited, and also I've done a lot of work on boats, so I knew what I needed. So I grabbed my bag, which I've got filled with all sorts of different. Clamps and articulating arms and magnet mounts and all this stuff and all the underwater housings, we went out on the boat. Once out on the boat i knew i wanted to get a shot of Marco actually driving it. Because just having the boat with the engine in the back or just the waves, those are nice shots to have but whenever i can put a person in the.

Framed, it becomes dynamic for me. So the first thing I did is I took a clamp with an articulating arm and a GoPro on it, and I mounted it right in front of his face. But wide enough and just up a little bit so I could also see the wake behind the boat. So we had that action in there. We'll probably only use a couple seconds of it in our multimedia piece, but it's got action. And we're always looking for action, especially in video. One of the other tools that I have on the boat is a painter's pole. Simple thing. You can go to hardware store and buy one for $10. What it's great for is when working on a boat or in the water, you can put a clamp at the end of your painter's pole and then mount Go Pro.

And you can stick this under the water. You can also play with doing small jib arm motions with your painter's pole. So, you can hold it out and just small movements really show dramatically on film and they're good things that you can cut on when editing. Any time you have a little bit of motion it gives the editor. In this case me, since I'm going to have to edit this piece. Something to cut on to get into my next take. So after I go this, this lock down shot, I took the camera off of those. And just walked around the scene used it just like I would a still camera or a DSLR camera.

So I could get tight shots of his face, get tight shots of Marco's hands, step back up to the bow and get some wider shots. So again, it's always about working your scene and using all the tools that you have at your disposal. >> Okay. This is actually, might be interesting to kind of see. You know there's muscles under here. Right? >> Fine. Yeah. >> If, if we could catch. May, maybe we want to be on, the lighter side where we don't create a shadow. But. These are arthropods, they're pretty cool.

This little creature here, that's a type of an arthropod, it's like a giant zo plankton. That's cool. Like a little shrimp. You can see they're all over. >> Once our boat arrived at the platforms I tried to photograph. The platform from the boat once I realized that, that wasn't working for m. And the place that I wanted my cameras to be and I wanted to shoot was on the platform. All I had to do was ask Marco, he could have said no but he said yes and I really lucked out and that's a really important. Lesson for people to learn is if you don't ask, you're never going to get it.

And the worst that's ever going to happen is someone's going to say no. So if you have an idea in your head of a location or a place that you want to stand or a place you want to mount your GoPro, just ask. Chances are they're going to say yes. And it's going to be a huge payoff for you. I got some killer images of the mussels underwater, but I needed some kind of motion or action to make this a little bit more dynamic for me. So I asked Marco to come on in and sit down in that frame. And I, I'm, I positioned him exactly where I needed him and told him the motions that I needed for where the camera was.

>> Like that on it. >> Right past it. >> Exactly. Yeah, yeah, yeah. >> I had the camera pointing down the long strings that were holding the muscles. And had him come in and pull the string up above the surface so we could see them. Often times you have to direct people to do what you need. And you gotta really have an open line of communication with them to tell them what you need. If you can't explain to them where they need to sit, where their hands need to be, you're not going to get that shot. And then all the way back down. Nice. Nice, nice, nice.

That's so cool. I had no idea this is how it was farmed. >> 20 foot ropes. >> That's cool. >> Once I got all the material that I thought I needed for my story on the floating platforms and with the mussels. I thought we got some pretty good coverage, and I felt confident about it. I decided, you know what? The wind's died down a little bit, the sun's out, this might be a great opportunity to use one of the coolest gadgets that I have. A Quadcopter, that I can actually mount a GoPro to, and do some aerial filming with

Video: Getting the GoPro in the water