Exploring the gear used for the GoPro course 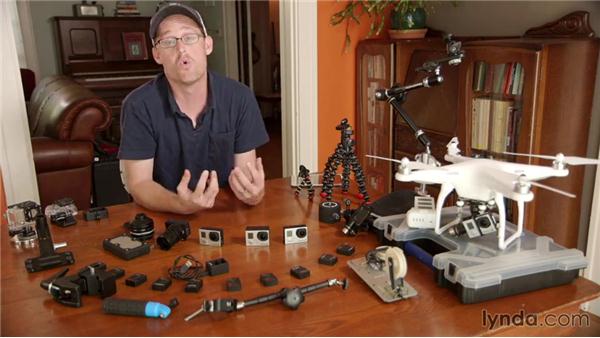 Since I'm shooting my multimedia project on farming in Washington with the GoPro camera, in this case the GoPro Hero 3 camera, there's a number of accessories that I'm going to need. First and most important thing I need is a number of batteries. I'm going to be working in the field and I'm probably not going to have outlets when I'm working near the ocean or in a farm or on a vineyard. So I've got a whole bag of batteries that I'll be taking. I'm also going to need to charge those batteries in the field, even though there's not an outlet.

So, I have a battery brick that I can actually attach my charger to, using these USB ports, or I can also use this battery to attach it directly to the camera, if I'm going to do a longer time lapse. The other great thing about these cameras. Is their size, which means I can mount them in some very strange places. But in order to do so, I'm going to need something to put them on. I've got arms that attach to Cardellini Clamps. I've got GorillaPods, and these things are really great because you can attach them to things like tree limbs, or even to parts of a car, or a boat if you're out doing the shellfish story.

We can also do time lapses, using what's using a camalapse. The camalapse is great, it's essentially just an egg timer and you put a GO Pro on top off, but it gives the camera a little bit of movement. It'll do a panning action while rotating, and you can do a time lapse, or you can do it in a video function too, and speed it up or slow it down later and post. When you shoot with the GoPro, you're essentially shooting blind unless you have an LCD screen that you can attach to the back. This makes this a very functional camera now because you can actually see exactly what you're recording, without this, you cannot.

The other way you can view the images that you're recording is by using an iPad or a smart device, with the GoPro app installed. This allows you to turn the wifi function on your GoPro on, and basically use you iPad as a field monitor to see what you're recording. This is also really fun because you can share the images and video that you're recording. So if I'm out on the farm taking pictures all day, and one of the farmers says, can I get some of these images tonight? I can do that on the drive home as long as I've got WiFi, I can send images in an email to the farmers.

It really helps create a rapport with your subject and that's always important when shooting your project. I also want to use the GoPro in some other places, but I can't use my DSLR, say like, in the sky. I'm going to be going out to a vineyard, and I'd love to get aerial images of a vineyard. Couple years ago, this wouldn't be possible unless I chartered a helicopter or an airplane. But, now a days, you can actually purchase a quadcopter. They're a little bit pricey, but there are within the realm of affordability, they're much less expensive, than say, chartering a helicopter for one hour.

The Quad Copter really only works well for taking still images or video. If you have a device called a gimble. All this gimble does is levels your camera and steadies the shot. And if you want an even more affordable device to get some of this action shots on your GoPro. You can go to a hardware store and for about ten bucks you can make a zip line I went to a local hardware store got a couple zip ties, a metal plate and a couple wheels five minutes later I had a device that I can put on any rope.

And uses a zip line, I'm going to be shooting in a vineyard in this project, and I already have this idea of putting the zip line in between the different rows of grapes and sending this shooting down, I think this is going to make some really dynamic images. The way this works, is with this metal plate, and a magnet mount for your go pro. You've got a cheap inexpensive and very dynamic tool in order to create some great images for this project. One of the most important accessories you can get for your GoPro and it's rather simple is the under water housing.

This is what makes this camera water proof and also extremely sturdy. I've dropped these from probably ten 20 stories in the air, land it and I still have my footage. These are incredibly important if you're going to be out in the field doing some rugged stuff and, if you want to put the camera in some of the coolest places like in the water or, in this project, I'm going to be sticking it in a lot of mud, this is essential. Just be sure you don't put your GoPro in the water if it's not in a housing and closed securely. Once you start accumulating all these accessories for your GoPro, you're going to realize you have a lot of small little pieces you might lose.

Again, I went to the hardware store and I got a very inexpensive case that's made for holding nuts and bolts. This is a great way to organize all your little parts, the screw mounts, your batteries, even the chargers. It is all accessible and you can not lose as many things. But once I'm in the field, I'm going to need to put my gear in something else and all I use is a really small pouch. This is great and this is, again, one of the coolest things about the GoPro is its size. I could take five cameras with me in the field and fit it on a small pouch that's going to go on my belt, I could never do that with my DSLR.

So when I go out shooting in the farm, I'm probably going to take this pouch. A multi tool because there is lots of things that need screwing for different mounts and go bo arms and all sorts of devices. A number of cameras I'm going to load up my batteries. At least one charger. My big brick in case I can't find an outlet. A couple underwater housings, and I can go make a project. And I don't want you guys to think just because I have all these accessories, you need them in order to go do a project. You don't, I'm just trying to tell an entire story using just the Go Pro camera.

In my real world, I probably wouldn't do that, I'd probably be using a DSLR, and occasionally using a GoPro when I need to. But for this experiment, I want to try and actually tell the whole story with the GoPro. So, I'm going to try to utilize a number of accessories that really make this a special project and get this camera in some special places. But don't let that hinder you going out there in making a project with what you have.

Video: Exploring the gear used for the GoPro course