Documenting the shellfish farmers with a GoPro 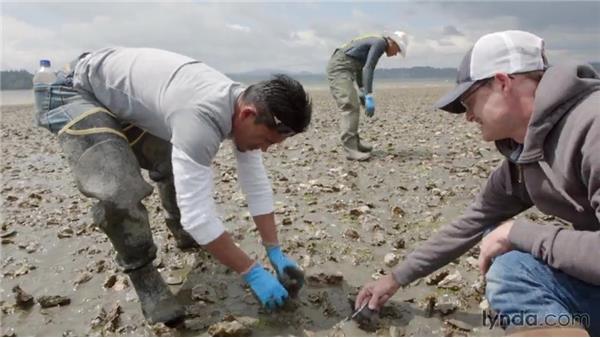 Join Paul Taggart for an in-depth discussion in this video Documenting the shellfish farmers with a GoPro, part of GoPro: Creative Photography and Video Techniques.

…When I arrived at the shellfish farm this morning,…I wasn't quite sure what all I'd actually be photographing today.…I knew there would be some interesting activities going on, but…I've never been to a facility like this before.…I lucked out because one of the employees, marco, came along with us.…I didn't know what I was getting involved in, so…it was really great to have somebody that really knew the process.…What's also great is they actually used go pros as part of their work here.…To watch the shoreline change for low and…high tide, and so he actually knows a bit about go pro's and…he came to the table with some creative ideas that really helped me out, and one…of the best parts was he actually had a big weight that they used to do this that…had a metal stand on it that we were able to put a clamp on and then put our go pro.…

So he helped us carry it down to the shore, set it up, and…we ran the time lapse for about two hours, I think.…So hopefully, when I look at this footage,…we're going to have the camera from being dry and…

Video: Documenting the shellfish farmers with a GoPro