Writing and committing in small pieces 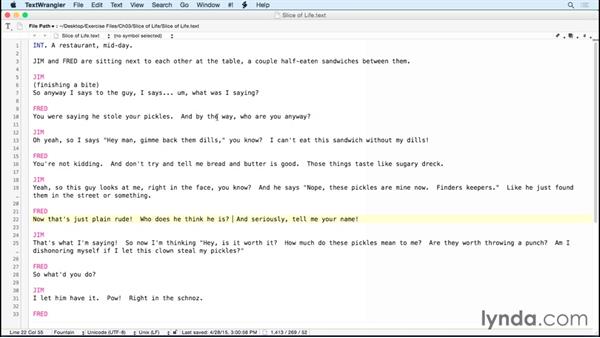 - In this video and over the course of the next several…we're going to go over some basic version control…work flows using the example of writing a screenplay.…Here in the exercise files I have my folder…containing my screenplay.…It's called Slice of Life.…So I'm gonna drag that onto SourceTree…and create a new project.…Here we go, just leave the settings just as they are,…and I will open this.…Okay, so, I have a single file in here.…It is a text file.…It's a special kind of text file,…which we'll get into in a minute,…but let's just get this file in there and tracked.…

Initial commit.…Click the Commit button, and there we go.…So, now I have the file in there.…Let's talk about it.…In fact, let's start by looking at it.…I'm gonna open the file in TextWrangler.…There's no reason that you have to use TextWrangler.…I'm using it because there is available for it…a syntax highlighter for the specific kind…of text I've written.…The specific kind of text is called Fountain.…I've installed a module…that will give me a little bit of syntax…