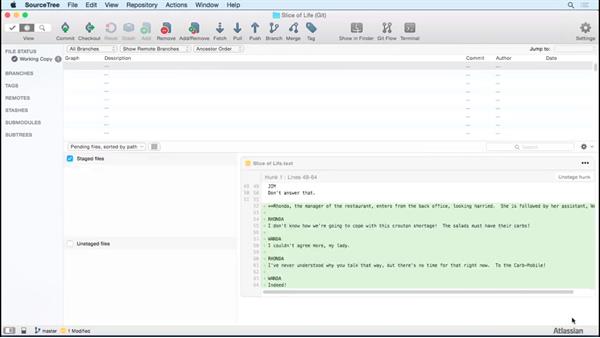 Join Joe Chellman for an in-depth discussion in this video Writing in big chunks, and committing later, part of Version Control for Everyone (2015).

- One of the things that I always thought you had to do…when working in a version controlled system…is that you had to work like we did in the last video,…where every time you did a unit of work,…you needed to commit it then,…and it would be hard to go back and make a bunch of commits…based on a bunch of work that you've done all at once.…Isn't true, and I'm gonna show you how to do it now.…So let's say you've done a whole bunch more work…on your screenplay.…To save a bit of typing, we're going to fake this.…Go back to the exercise files.…

I have this additions text file here.…Gonna open that up in TextWrangler.…This is just the whole screenplay,…but with a whole bunch of extra stuff added.…All right. Maybe not a whole bunch,…but more than we could type in just a couple seconds.…So I'm gonna copy all that,…switch back to a copy of the screenplay…that is actually tracked in my project,…and just paste right over it and save.…And I can close this. Okay.…So let's take a look in SourceTree and see what happened.…

Switching to my Uncommitted Changes area,…