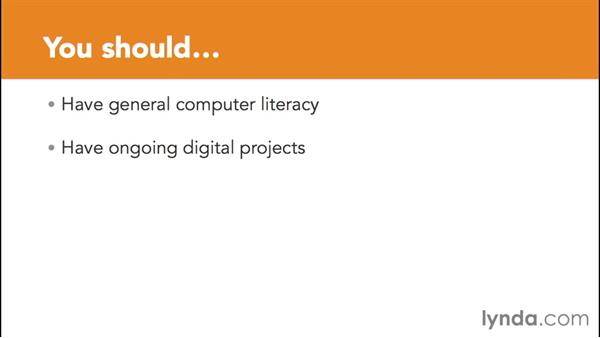 - Here's what you should know coming into this course. First of all, all you need is general computer literacy. You don't have to know any specific applications, other than the ones you already work with. You should have ongoing digital projects. These could be personal or work projects, whatever. They don't have to be ongoing, but work that takes place over some significant amount of time is well-fitted to working in version control, because you're keeping track of what you're doing over time. Of course, once you get hooked on it, even short projects, projects that only last a day or a few hours, could still benefit from what we'll look at.

Then, finally, you should want to make better mistakes. What on Earth do I mean by that? If you've ever of failing faster or wanting to take bigger risk, that's the kind of thing I'm talking about here. When you start using Version Control you keep track of what you're doing, and there's always a snap-shot of your work in a state that you thought was good enough to keep track of. So that way, you can boldly go off and try totally new things, whether it's in writing or design or whatever. You always have the previous work that you know is pretty good to fall back on.