Stashing changes that aren't yet ready 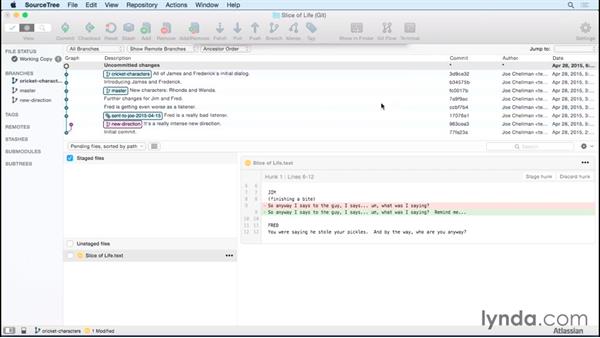 Join Joe Chellman for an in-depth discussion in this video Stashing changes that aren't yet ready, part of Version Control for Everyone (2015).

- Depending on how your creative process works,…everything that we've seen so far…might be sufficient for you.…You've seen how you can work forward and backward,…how you could create a new branch and go off on…a sort of tangent, and keep working in that direction,…and if you were to work that way…and just keep pursuing that tangent to the end,…and that's where you got your final product, great.…But if you might end up working on multiple directions…at the same time to try different things,…whether it's in a writing process…or some other creative process,…you may need to work on multiple branches at once…and find yourself in situations where you have some things…that are, maybe, not even quite ready for a branch.…

So, we're going to look at a quick way to deal with that…and why that actually does come up.…So, here I am on the cricket-characters branch,…and let's go back to the screenplay,…and let's say I'm working on something here.…I'm just starting to write a couple of things.…I just kind of stop there, maybe go get a coffee,…