Sending a set of changes with a patch 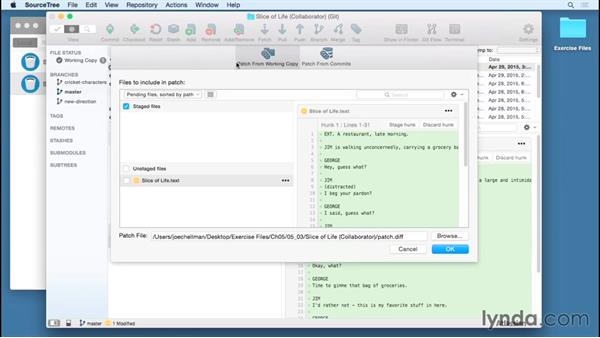 Join Joe Chellman for an in-depth discussion in this video Sending a set of changes with a patch, part of Version Control for Everyone (2015).

- We've looked at ways to share your project…using GitHub or other services as an intermediary.…There are other ways to sort of share the changes…that you've made directly.…We're going to look at one of those…techniques in this video.…I'm going to have to kind of fake this.…I'm going to have to share with myself…for demonstration purposes.…You should get the idea.…Let's say that I'm working on my screenplay,…and I'm going to go on vacation for a little while.…So, I ask a collaborator to take a crack…at something I wanted some help with.…I have here, my copy of the repository,…and my collaborator has his copy also.…

If I look is SourceTree, I have these two projects here,…and now normally, you wouldn't have yours…and theirs together like this.…Again, we're just demonstrating, so, bear with me.…Here is my collaborators copy.…He's been working on it,…and he has a whole new introduction written here.…It's currently Uncommitted,…but it's saved and sitting in there.…Now, there's different ways that he could get these…

Video: Sending a set of changes with a patch