Merging when experiments are done 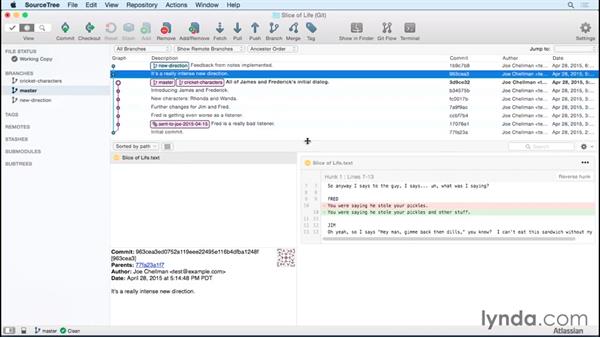 Join Joe Chellman for an in-depth discussion in this video Merging when experiments are done, part of Version Control for Everyone (2015).

- Merging can be a little complicated sometimes.…So, if you just don't wanna deal with that complication,…you might never need to.…If you're fine just working in a linear way…or occasionally making a branch,…but then sticking with it after you've made it,…you're never gonna have to worry about merging.…But, if you ever have to go back into a situation…like we have here with this new direction branch…that's operating separately from this other one,…and they might wanna come together at some point,…or if you just want a single branch…to always reflect the latest version, the greatest version,…you're probably gonna need to look at merging somehow.…

So, there are different ways that you…can actually execute a merge.…If you look at two branches or any two commits,…you can see over here the diff between them.…So, between these two, there were just additions,…you can see there's only these green highlighted rows…with plus signs right here.…Sometimes they get a little more complicated,…lines appear to be removed and then added.…

Video: Merging when experiments are done