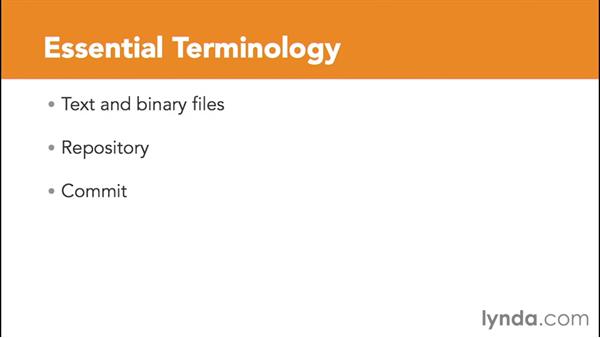 - As we get into talking about Version Control,…as with any system, there's a bit of jargon…or, what we'll call, essential terminology…that you'll need to know to make sense of things.…So, let's go over these terms.…First, text and binary files.…If you haven't heard of the term binary file before,…that basically just means, any file that's not a text file.…Technically in computers, all files are binary,…it's all ones and zeroes,…but text files, sort of get special treatment.…So, you have your text files, and then you have…pretty much everything else.…

Next is repository.…Now a repository in the old school world…of older Version Control tools usually meant…a central server where all the actual tracking of stuff…happened.…In this course, we're gonna be using Git.…Which is a distributed Version Control system.…Which means that everybody has their own copy…of the repository.…In other words, the repository is just the folder…of the stuff that you're tracking…for that particular project.…A commit is a unit of work.…

You're going to decide how…