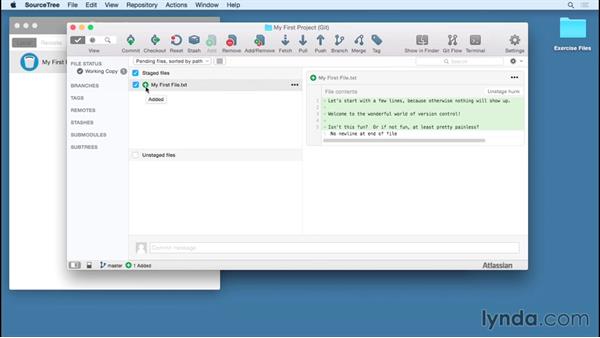 Join Joe Chellman for an in-depth discussion in this video Initializing a project, part of Version Control for Everyone (2015).

- Okay, we have SourceTree successfully installed.…So let's create our first project and get started…looking at how this all is set up.…So here in the Exercise Files I have My First Project.…It's just a folder.…Whenever you start working with Version Control,…you want to have a folder…in which all of the other files for that project…that you're going to keep track of live inside.…In this case I just have a single file called My First File.…Open it up just to see what's inside here.…It's just a txt file.…

I'm opening it up in TextEdit,…but it doesn't matter what you use.…I just want to show you…that there's just a few lines in here.…We need to have something.…Git can't keep track of empty folders.…So got a little something-something in here.…I'm going to take this folder and drag it…into the main SourceTree window back here.…So I can call the project something…other than the folder name if I like.…I'm just going to keep this as is.…The destination path is filled in for me…because I've dragged and dropped that folder in there.…