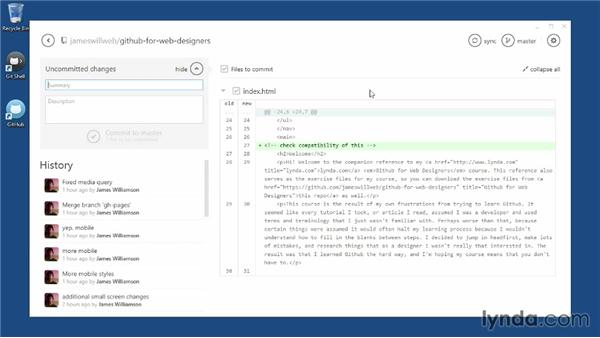 Join James Williamson for an in-depth discussion in this video Exploring the Windows client, part of GitHub for Web Designers.

Before we get into the specifics of using the GitHub client. I want to take a moment to explore the Windows client interface in a little bit more detail. As you've probably noticed from watching the previous part of the course. I'm recording this course on a Mac. So normally if I have a client that has both a Mac and a Windows version. And if there's, you know, a slight difference in the interface here and there, I might do a movie. Where I show the interface differences between the Mac and Windows. The problem with the GitHub client is that it is really different from one platform to the other.

I'm not going to say that one is any better than the other. I'm really fond of the Windows one, to be quite honest with you. I really like the interface, I think it's really slick. Very well designed, but they both have pretty much the same features. It's not about feature set. It's really about knowing where everything is. And, if you're on a Windows machine and you have this client installed and you're watching me use the Mac client, you're probably going to be pretty frustrated because you're going to say look, that is not in this interface the same way that I have this. What is going on? So what I'm going to do is I'm going to sort of put you though the paces of where to find things in the Windows client so that when you're watching the horse and I'm working with the Mac client, you'll kind of know where things are.

So, it may take you a little bit longer because you're going to say, okay, this is what he wants me to do, this is my next step. Okay now I'm going to do that within this interface. It's not totally night and day, but there are some really big differences. So,. Use this particular movie as a way of introducing yourself to the interface. And then use it as a reference later on in the chapter to say, oh, okay this is what he's doing. I'm going to go back and watch that and see kind of how he did that. Alright, so the very first thing is when you open this up. You get a sort of a high level overview of your local repositories as well as your remote.

Now. I've signed in as my normal jameswillweb, not my jameswillweb2 account, because I want to put this client through its paces and I couldn't do that with my jameswillweb2 account, which really only has that one repository that we've been working with. Okay, so for my local repositories I downloaded the repositories for this course, which is live, and you can go out to my GitHub account, and you can download the exercise files, and check out the reference that I'm going to show you guys a little bit later on. But that is the repository for it. If you notice, down at the very bottom it says, drag a repository here to add, so when I'm adding a local repository a little bit later on in this chapter, that's all you have to do.

Just take the folder and just drag it right there, and it'll walk you through adding that as a local repository. Now, it also shows you your GitHub repos. So if I click on this, I get a listing of all of my repos up on GitHub, and in this course, currently I've got about five or six of them up there, so you're seeing those. Okay. So I'm going to go back to my local repository here for a moment. Loading up a local repository is kind of the default view inside of the GitHub client for Mac, but on Windows it's not. You'll see a full list of them here, and then in order to examine one in more detail.

this is a little tricky because it's got the pin, so you can pin this to the top of the list, or it's got the arrow. And sometimes it's kind of hard to hit, and I hit the pin by mistake all the time. But you want to click on the arrow that opened up the repo itself, and this changes the view of the window, the interface totally changes, and we're now looking at the local repo. This arrow in the upper left hand corner will take me back to sort of that global overview look. So that's how you kind of switch back and forth between the overview versus a local repo, okay. So when we're looking at an individual repo, over here on the left hand side, we're going to have the history.

Now, this is actually pretty similar. So the way the interface is set up on the GitHub client for the Mac, so this part won't be totally alien to you. Now I actually have on purpose might I add, an uncommitted change here so if I want to make a commitment I type in a summary of it so I'm just going to say added comment and for description I have no idea why I did that. Perfect. And then I can commit that simply by clicking and it makes it commit for me. And now it's not showing any local changes. So I kind of jumped the gun on that and I probably shouldn't have done that because when you have one of these clicked on, of course, it's going to show you the difference between your stage version and your previously committed version.

So that's kind of nice. Now when you click on one of the commits you'll notice this is unsynced. So I have not committed that up to my remote repository, nor will I might I add. But notice that I can jump over to GitHub, so I can actually view the commit on GitHub. If I've synced it, I can revert and roll back. Later on in the chapter we'll be doing just that, reverting. Commits and rolling back through commits, so that's kind of how you do that. And then if I wanted to see branches, so that's the other thing about this. It's not quite as easy to find where are branches are. They're right here and to switch a branch you just click on this icon.

And it's going to ask you which branch you want. So unlike the GitHub client for Mac where you separate screen for branches, here you just sort of have this one. And so I could click on the GH pages, and it would load up that branch. And you can see that there are no changes on that particular branch, and then I can switch back to master. By doing that, so that allows you to kind of toggle back and forth. Now to sync your branches to your remote repository, you've got the sync icon up here, it's in pretty much the same location it is on the GitHub client for Mac, as that sort of thing. Now, merging branches on the other hand is a little bit harder to do or harder to find.

Find I should say, not harder to do but harder to find on the Windows client then it is on the Mac. So we go up to where we would normally switch between branches and we click right here to do a merge and then when we get to merge we get a screen that's a little more like the one that we see on the Mac it's basically like okay who do you want to merge together. I want to take and merge the master where I just made that change into my gh pages, which doesn't have that change. And then I can just go ahead and merge, and it'll do that for me. So it's very, very easy to do. And notice, there's even undo, which is amazing, that's really cool.

The Mac one doesn't have that. But that's kind of neat. And then I can go back to the current branch. Okay, so that's pretty much the paces of the interface for the GitHub client for Windows. You'll notice as you're watching the course in this next chapter when I'm going through the client that there are some real differences between the Mac client and the Windows client. But they're not so big that with just a small little reference like this one, you should be able to figure out how to accomplish the task in a pretty short amount of time.