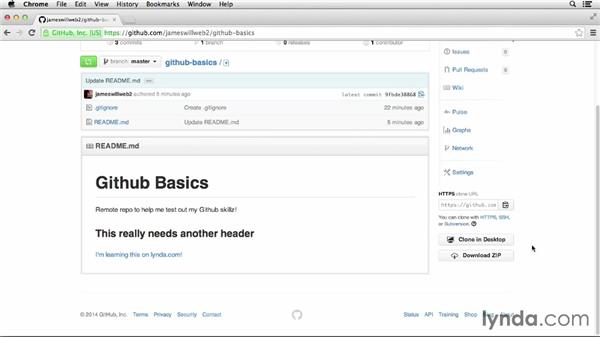 Join James Williamson for an in-depth discussion in this video Cloning the repo locally, part of GitHub for Web Designers.

We have the basics of our remote repository set up. We have created the repository. We've added a get ignore, and a read me file. And we've also assigned a license to it. So now we might want to pull this repo down locally, and begin actually adding all of our project files to it. The HTML, CSS, JavaScript that sort of thing. And this is a work flow that a lot of people use. They come onto the GitHub site, they'll initialize a remote repository really quickly, and throw in a template for a get ignore. Write a real quick read me file to act as a place holder until they're ready to maybe be a bit more descriptive with it, and then pull that down and begin working.

Other people like to go the opposite way. Which is to do everything locally. And then when they're, you know, at a good enough stage for committing, go ahead and pushing it up to a remote repo that they create. It doesn't matter which way you do it really. It's just helpful to know how both methods work and in this exercise. I'm going to show you guys, how to take a remote repository that you don't have local yet and clone it down to your local machine. So there are a couple of ways to do this. Again, I'm on the GitHub basics repository that we've been working with. If I scroll down on the right hand side of the main view of this repository, I can see that I have the HTTPS URL for cloning this repository.

So now if I wanted to I could copy that to my clipboard. I could go into terminal. And I could do a Git clone command with that URL and it would pull down the entire repo. That's certainly one way of doing that and, and the previous chapter when we were talking about terminal so much, we probably would have done it that way. But there's actually an easier way. We've already installed the client on our desktop for both Windows and Mac, depending on which platform that you're on. So if you already have it installed, this clone in desktop is a really nice option, we're going to do that one. But before we do that, I want to talk about the little button underneath it which is download ZIP.

If you do that, it's going to zip all the files in your remote repository up, and then download them to you, wherever you want them. So that's not the same as establishing a local repo, that's not what that does for you. It does allow you and anybody else that accesses this repo to download all the files, if you want to play around with them locally or work with them, but they're not going to be tied in any way to the repo. Okay, so if I click Clone in Desktop, you'll notice that Chrome is saying, whoa, wait a second, this page is trying to connect to an application, do you want to do that? I want to reassure Chrome that nothing bad's going on here, and I'm just going to tell it to launch the application.

It'll take it probably not more than two to three seconds, because it's really just two text files that it's going out and grabbing. But it's grabbing those and pulling them in as a local repository. So now, we have both the remote repository that created on GitHub, and we have the exact same repository cloned locally. In the location of our choosing. And it's just so super easy to do with the GitHub client. I understand using terminal, I like it, actually I'm starting to grow a lot fonder of it than I was before, but you just don't get much easier than that.

So at this point, because we have both a remote and a local repository we can certainly develop locally, and then push up to our remote repository anytime that we wanted to do that. So again, this workflow basically has someone creating a repository on GitHub. Adding some of the default settings that they want to to it. Pulling it down, cloning it locally, and then beginning to develop. Whether that work flow works for you or not, really only you are going to know. I would encourage you to experiment with a couple of different work flows of creating repositories within GitHub. Whether you start local or you start remote.

Just to find the one that's right for you. All right, we're almost done with all of our GitHub basics, but in the next exercise I'm going to show you how to get rid of repos that you don't really need anymore.