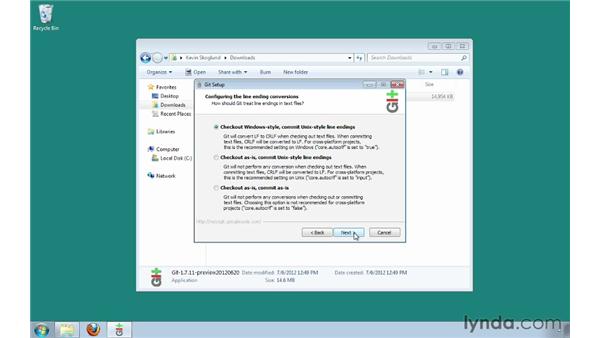 Join Kevin Skoglund for an in-depth discussion in this video Installing Git on Windows, part of Git Essential Training (2012).

In this movie, we are going to learn how to install Git on Windows.…I'll be installing it on Windows 7, but the process will be similar for any version.…The first thing you need to know is where to find Git.…In the main Git web site, it's going to be at http://git-scm.com.…SCM stands for source code manager.…When you go to that web site, there will be a link that will allow you to…download and then install Git.…Before we do that though, I want to also mention another good resource to you,…which is that GitHub, one of the popular Git hosting companies, provides very…detailed step-by-step instructions with screenshots at this URL.…

So if for any reason, things change in the future or if you get stuck, this…might be a good resource to help you get unstuck.…But I am also going to walk you through the install step-by-step.…So this is the Git web site, see git-scm.com up here in the URL, and when you go…to the page, at least at the moment, it has a link right here that detects that…I'm coming from Windows and offers to give me the latest stable release.…