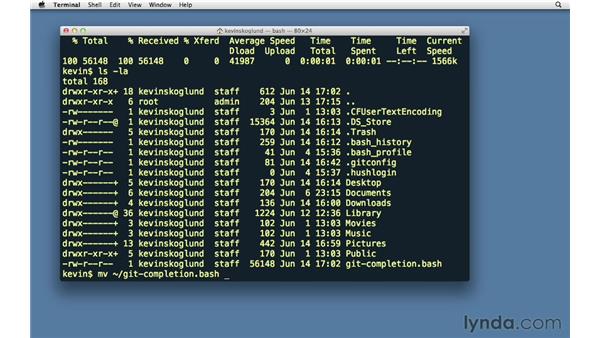 In this movie I am going to help you to get auto-completion set up for Git.…Now this is a nice bonus feature, it's not something that you have to have, you can safely…skip over this movie if you want to.…However, I think it's something that you're going to want over time, and it makes sense…for us to go ahead and set it up at the start.…Now these instructions are going to be for Mac and Unix only, because Windows should already…have auto-completion included, so you shouldn't have to do anything there.…So if you are on Windows, you can go ahead and skip this movie, if you are on Mac and…Unix, follow along with me.…Now the first thing we are going to do is download it from GitHub.…I am going to walk you through all these steps one at a time and actually show you how to do it.…

I wanted to give you the commands here.…The first is we're going to change to our user directory, then we are going to use the…Curl tool which is going to go to the URL at GitHub and download the auto-completion…script into our home directory. Then we will rename it.…