Configuring the command prompt to show the branch 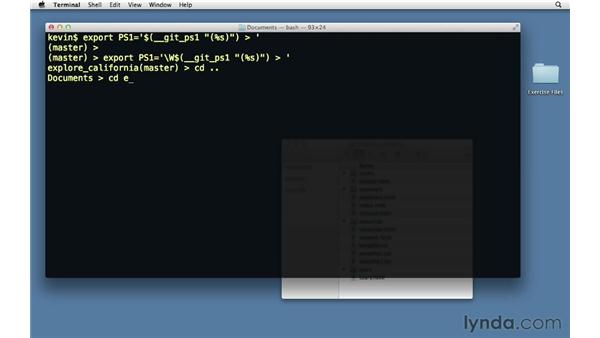 Join Kevin Skoglund for an in-depth discussion in this video Configuring the command prompt to show the branch, part of Git Essential Training (2012).

Now that we understand the basics of working with branches, I want us to pause and add …a little something extra to our configuration, and that is I want us to configure a command …prompt to show us the branch. …This is not strictly necessary, but I think at some point, most Git developers choose …to do this, so it's worth us doing here. …Now the command prompt is this bit that's right here at the beginning. …So every time I hit a Return it prompts me with a bit of text. …Yours almost certainly looks different than mine, because I have already configured mine just to say …Kevin with the dollar sign after it.…

What we're going to do is have that include our branch name as well. …So that way it will always tell us which branch we are on. …Every time we enter a command the current branch is sitting right there at the beginning …of the line, and that will help to make sure that we don't end up in a feature branch when …we actually meant to be on our master branch. …We will take a look at this in two parts. …

Video: Configuring the command prompt to show the branch