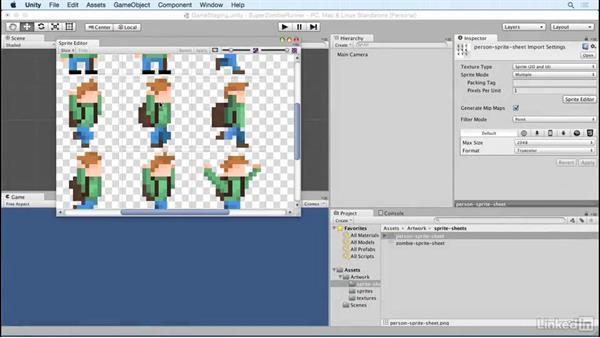 Learn everything you need to get started in Unity 2D game development. Build your first Unity game for desktop, web, or mobile, complete with scrolling backgrounds, reusable game objects, and custom UI.

- [Voiceover] Hi, my name is Jesse Freeman and welcome to my Unity 5 2D Essential Training course. In this course we're gonna build an endless runner. This game is going to teach you the fundamentals of building a 2D game in Unity, and it'll also be scalable so that when you're done with the course you can change the artwork out and build your own endless runner. We'll learn how to work with sprites, how to use Unity 5's TexturePacker, how to build repeatable textures and make them scroll. We'll talk about object pooling, building a player and making them jump.

We also add UI using Unity's new custom UI components. We'll keep track of score, and how to save the high score between game play in Unity 5. And now let's get started with Unity 5 2D Essential Training.