Connect the score to the game manager 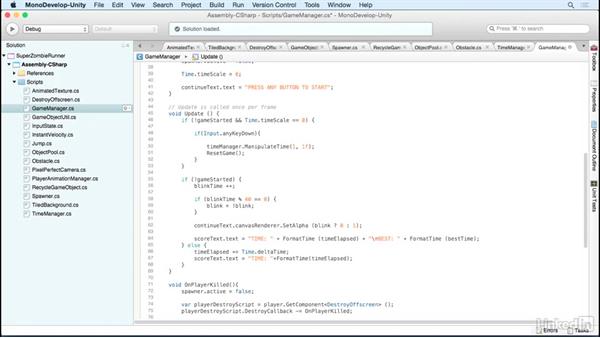 In this video, Jesse Freeman teaches you how to use Unity’s PlayerPrefs class to store persistent data that can be read between game sessions. This is useful for storing settings and in this case, the high score from the player. Learning how to polish a Unity 5 game is an import skills for building a 2D game.

Next, we're gonna want a way to format the timeElapsed…when we put it back into the text field.…To do this, let's create a new method…that'll return a string,…and we're gonna call this FormatTime,…and in this, we're gonna pass in a float…that'll be the value of time in milliseconds.…And to just get us started,…let's have it return the value…and we'll call ToString to convert it into a string.…Now the first thing we wanna do…is display the time and the bestTime…when the game is not running.…

So here inside of our update loop,…

Video: Connect the score to the game manager