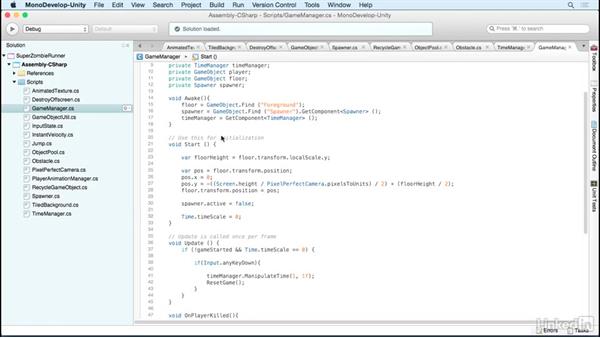 In this video, Jesse Freeman teaches you how to restart the game after the player has died. Restarting the game in a simple way allows your player to quickly return to the action and complete the game's compulsion loop. Learning how build a game loop in Unity 5 is an import skills for building a 2D game.

- [Voiceover] So now when the player dies,…we're able to slow down time…to give us the effect like the game is stopping.…Now let's look into how to restore time…and make the game start again.…By selecting our game manager…let's open the game manager script.…At the top of the class,…let's go in and create another private property…called gameStarted.…This is gonna be a Boolean…and we're gonna use this as a flag…to know when the game has actually started…or when the game is over.…

So here we're gonna test the gameStarted…does not equal true…