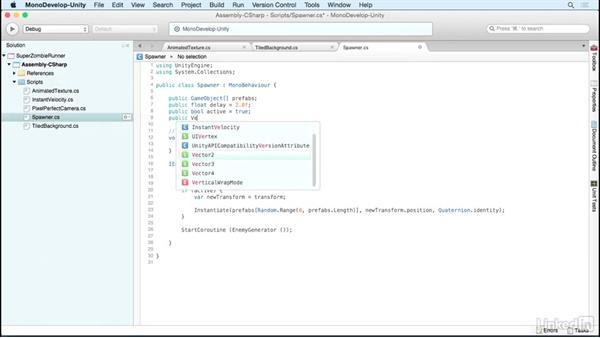 In this video, Jesse Freeman teaches you how to manipulate time between prefab GameObject spawns in your game. This is important for balancing difficulty later on in your Unity game. You'll simply change the delay between spawns to achieve different difficulty. Learning how work with GameObjects in Unity 5 is an important skills for building a 2D game.

- [Voiceover] Now at this point we've manually moved…the spawner off the screen.…One thing we can do though is we can nest this…inside of our floor so that when the floor expands…it moves the spawner along with it.…Let's select our spawner and lets zoom in a little bit more.…Since the bottom of every object it spawns…is going to be here at the center point of the spawner…lets try to center this inside of the floor.…Also because we're working with pixel art…lets try to avoid using fractions.…

Here we'll set this position to whole numbers.…Now if we nested the spawner into the foreground…and rerun the game when we zoom out…you'll now see that the spawner will always be positioned…towards the end of the screen.…Now as this continues to stretch there'll be more gap…between where the spawner is and the floor.…So one we can avoid that is to simply move…the spawner over just a little bit more.…Now if we rerun it we'll see the spawner…will be further off the screen ensuring…that when objects come out you…don't see them actually get created.…