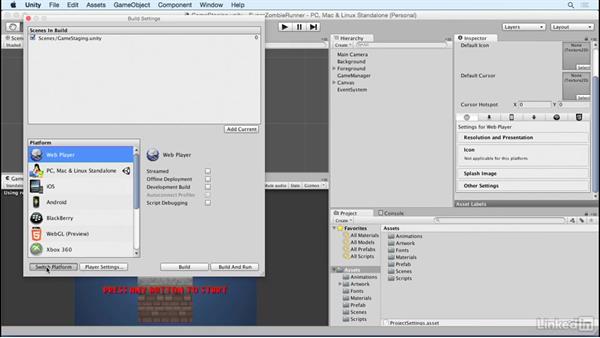 In this video, Jesse Freeman teaches you how to publish your game to various platforms such as MAC, PC, web, mobile, and more. By taking advantage of Unity 5's cross platform deployment, you'll have a game running in now time. Learning how publish Unity 5 game is an import skills for building a 2D game.

- [Voiceover] So the final thing…I wanted to go over was just a quick primer…on how to publish.…It's great that we built our game,…but unless other people can play it,…there's not much point to it.…So let's go into the File, Build Settings menu.…Now this panel hasn't changed…since the previous version of Unity,…but there are a few new options.…First, before you can even do a build,…you should add the scenes that you want in your game…to the scene menu.…Here, we'll select Add Current,…and this will add our game staging scene…that we've been working in.…

Now this entire time,…we've been working in the Mac, PC, and Linux…stand alone builds.…Let's leave this as is…and do a quick build to show you how the process works.…Let's select Build and Run.…Now here we'll get an option…to name the file that we wanna build.…Here we'll call it Super Zombie Runner Mac,…and we can choose where we want this build to go.…In this case, inside of my Projects folder,…I usually make a Builds folder and put it inside of that.…

You can also organize builds inside of folders here,…