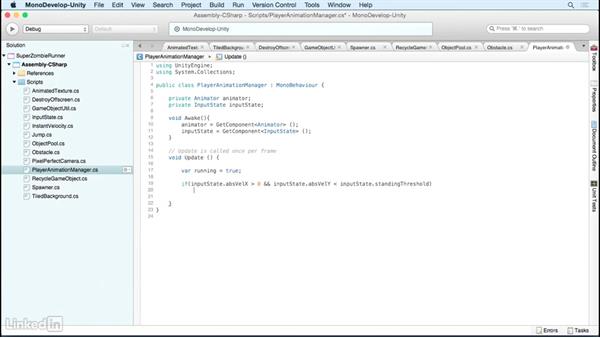 In this video, Jesse Freeman teaches you how to create a player animation class to help with each of the states of your player's sprite based animations. You'll create the class and connect it Unity's 2D animation controller so you can easily switch between idle, running and jumping animations. Learning how build a player GameObject in Unity 5 is an import skills for building a 2D game.

- [Voiceover] Now that we have our animation set up,…let's go in and create a class that can manage…switching between the two with code.…In our Scripts folder, let's create a new C# script,…and we're gonna call this Player Animation Manager.…Let's open this up and start adding some properties…in order to help manage our animator.…The first thing we're gonna want to do…is get a reference to the animator instance itself.…Here, we'll make a private property…that's typed to the animator, and call it Animator.…