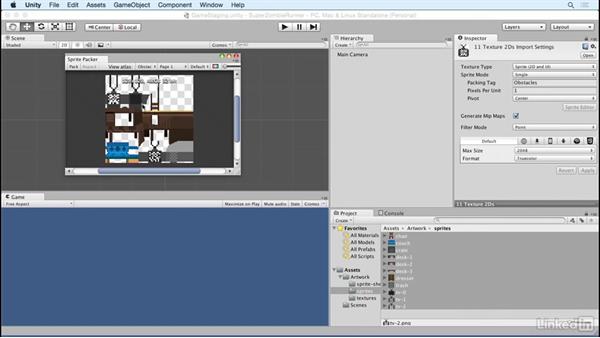 In this video, Jesse Freeman teaches you how to optimize sprites in Unity. You'll start by cleaning up loose sprites that are not part of a sprite sheet. Then you'll work with Unity's sprite packer to reduce draw calls. Working with artwork such as sprites in Unity 5 in an import skill for building a 2D game.

- [Voiceover] Now let's talk about…Unity's built-in TexturePacker.…If we go into our sprites folder,…you'll see we have all these loose sprites.…Now, it made sense for us to convert…these people and the zombies into sprite sheets.…But sometimes you're gonna have a whole bunch…of loose sprites inside of your game.…In this case, here we wanted to keep…each one of these as individual sprites.…But when it comes to performance,…we actually don't want them to be like this,…sitting inside of memory.…Each one of these sprites is gonna take up…a certain allocation of memory on the GPU.…

An easy way to fix this is to combine them…into a single texture.…Now we can use an external TexturePacker,…but now in Unity 5, using the TexturePacker…is part of the personal edition.…So in order to take advantage of this,…what we're gonna do is select all of our sprites.…And here you'll see there's a Packing Tag.…So what we're gonna do is give them a Packing Tag…so that they all share the same tag.…In this case, we're gonna call them obstacles.…