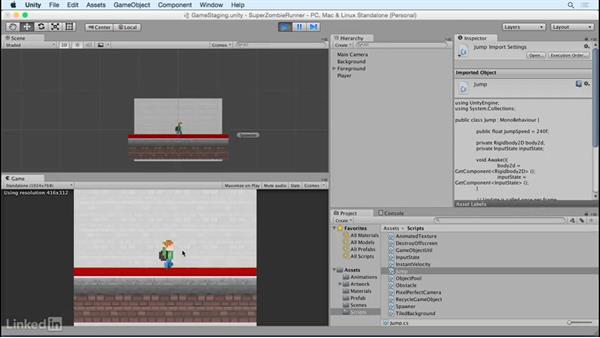 In this video, Jesse Freeman teaches you how to make the player jump. Once you master the basics of 2D physics and 2D collision you'll be able to add a vertical force to your player in order to make them jump over obstacles in your game. Learning how build a player GameObject in Unity 5 is an import skills for building a 2D game.

- [Voiceover] Now we're ready to make the player jump.…Let's go into our Scripts folder…and create a new script called Jump.…When it comes to adding behaviors like Jump,…or moving forward, I like to break them out…into their own little scripts.…This way everything is reusable, and also,…it only has to focus on doing one simple task,…in this case, making our player jump.…We'll connect the player jump to the Input State…so that the jump class has some sort…of knowledge of what the player is doing,…without having to know really much about the player itself.…

Let's open this up in MonoDevelop.…At the top of our class, let's add a few properties.…First, we're gonna need a public float…that represents the jumpSpeed.…Here we'll set this to 240.…Next, we're gonna need a reference…to the RigidBody2D and the input state on the game object.…Let's create a private property for RigidBody2D…called Body2D, and we'll also create a private property…called InputState for the input state.…

Next, let's make a new Awake method,…and in it we'll set the Body 2D and Input State…